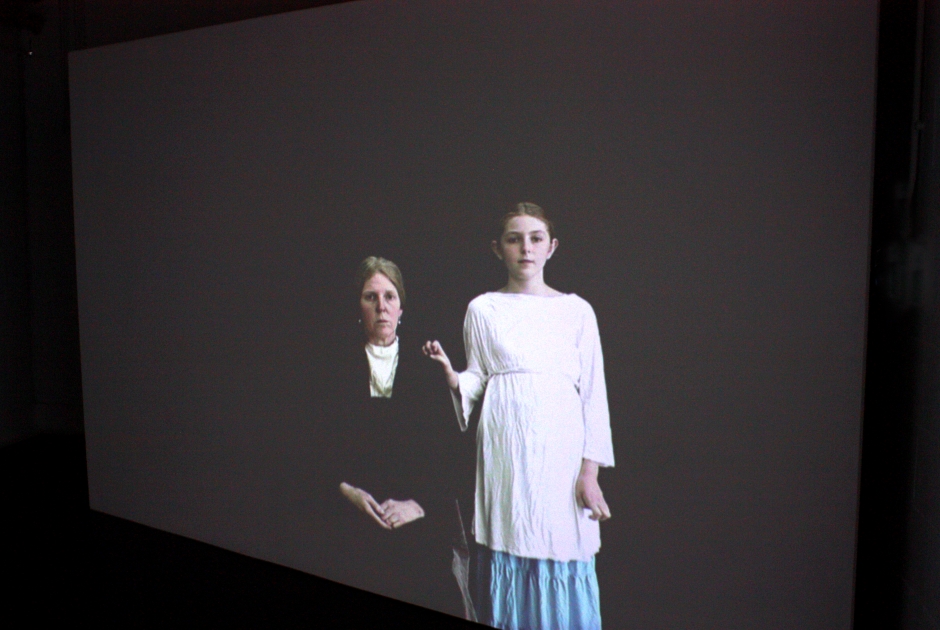 What is enduring about Bethe Bronson’s film 'Hidden Exposure' (2013) is its quietness and, in watching it, it is its tiny measures of movement and an in-between-ness that fascinate. The stillness of the pose of its two subjects, a seated woman and standing girl, and a slightly eerie quality have the ability to draw the viewer in.

There is a perceptible noise, white noise, and with a slight movement of fabric the girl's eyes close in a long slowed down interval of time. Continuing to watch, I am compelled by a delicacy of the smallest move. What I seem to be watching is the edge of something, a space between stillness and movement and a place between the two figures, which move very slightly as they seemingly try to keep their pose.

But what am I witness to? A space between something or the space of something missing?

Bronson’s work references nineteenth-century invisible mother portraits, vernacular tintypes of children that have an adult in the background, hidden under a cloth, and sometimes thought to be mothers, though more generically they may be better referred to as carers. These images have recently become publicly available through the flickr group 'Hidden Mothers', which was set up in 2009, and the artist Lisa Castagner has made a series of photographic portraits that directly reference them, though according to cultural historians there is virtually no written scholarship about the subject.1 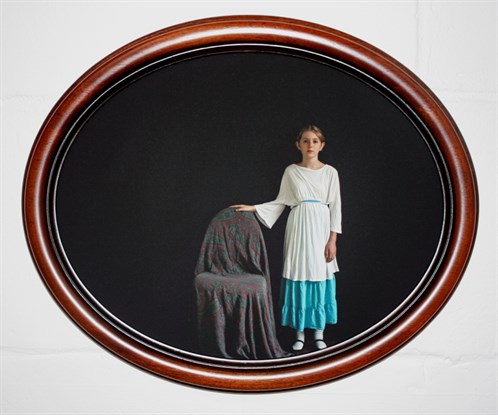 It is this sense of anonymity and being on fringe of something that Bronson’s film captures. Since I watched the film some weeks ago, its presence has remained with me and re-entered my consciousness several times, as have the 'Hidden Mother' portraits. There is an ephemeral yet enduring quality to Bronson’s film that is also to be found in this strand of nineteenth-century portraiture. I am reminded of something and yet I am not quite sure what.

Bronson comments, 'Conceptually as well as concretely, I'm concerned with what's not there, what we don't see and how it affects what do see', and for me it is what is not seen that appears to remain.

Helen Carnac is a maker and curator who lives and works in London. Drawing, mark-making, the explicit connections between material, process and maker and an emphasis on deliberation and reflection are all central to her practice as a maker and thinker.

Helen often works in interdisciplinary environments and is currently working with various designers and artists on projects, including a DJ, textile artists and choreographers. She has worked extensively in the UK and USA, and in 2011 ran a 4 month walking project as a guest Professor in Berlin. She is a member of the collaborative making project Intelligent Trouble, on Artquest’s advisory panel and is a Fellow of the Royal Society of Arts.

Since 2007 she has run the project ‘Making a Slow Revolution’ which aims to provide a forum for open discussion around the contribution of contemporary making and design to some of the philosophies presented within the Slow Movement.

Helen began to work with Siobhan Davies Dance and Laila Diallo on the Side by Side residency in June 2012 - they are currently developing ideas from this into a work which will tour from 2014. She has written chapters for two books to be published in 2013: Collaboration Through Craft (Bloomsbury, Sept 2013) and Contemporary Jewellery in Perspective (Sterling Books, Nov 2013) and recently appeared on Paperweight radio which broadcast on Resonance FM.