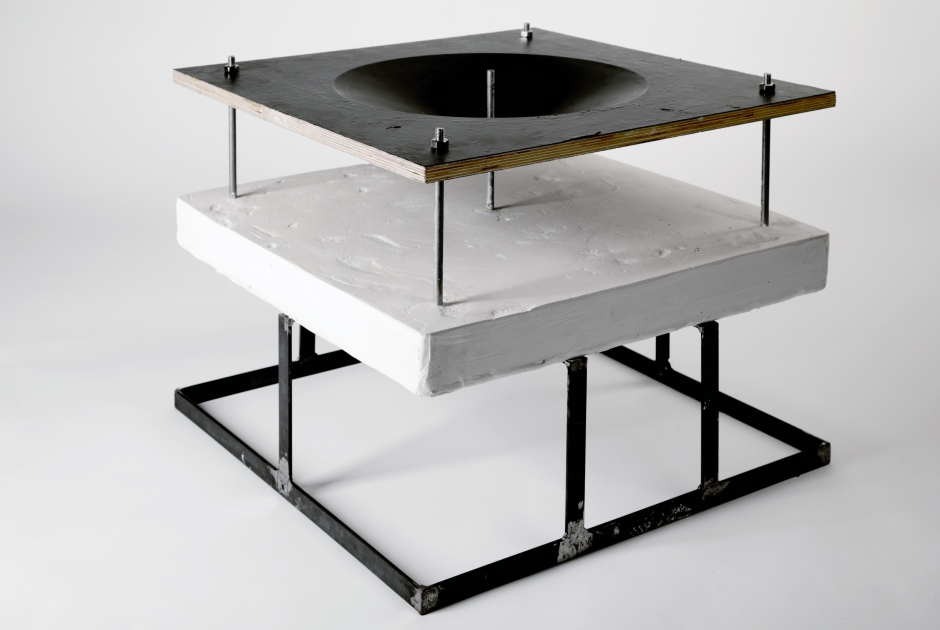 For her MA exhibition at Manchester Metropolitan University, Annie Carpenter presented examples of her sculpture and video practice. Whilst differing in their materials and modes of presentation, these works owe their coherence to a shared investigation of the notion of work and the labour of the artist.

The two sculptures entitled ‘Concept Models’ made from plaster, steel and rubber speak of industry and industriousness. Reminiscent of sections from modular building systems or an exploded view of a speaker design, their materials and mode of fabrication confer a suggestion of weight that alludes to manual labour and physical exertion. Heavy plaster blocks rest upon welded steel frames, and dense plywood sheets are pierced through by industrial scale nuts and bolts. The use of the word ‘model’ in their title presents the works as potential prototypes or samples from some undisclosed research. 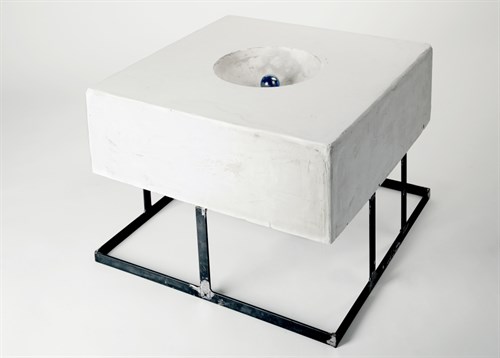 By contrast, in her video ‘Production Rings’ the hand of the artist is at first less obvious. A single view from a locked-off video camera reveals a woodland clearing bathed in late afternoon sun. The natural soundtrack of flowing water and the call and response of resident or visiting birds adds to the image’s sublime quality, invoking the bucolic landscapes of late eighteenth and early nineteenth century Romantic painting.

At first, only the occasional sound of restless feet and the crackling of branches underfoot reveal what we assume to be the presence of the artist off camera, until a seemingly perfect circle of smoke rolls into view and then dissipates, before being followed by further rings of smoke. Resembling the rings that cigarette smokers sometimes purposely or accidentally create, they are clearly manufactured as opposed to being the product of some natural woodland incineration activity. Devoid of any visual clue as to their origin, however, the viewer is left to wonder whether the smoke rings are the result of human or machine endeavour, their precision, regularity and quantity being suggestive of the latter.

The use of the word ‘production’ in the title once again suggests a focus on process and development and leads to a possible reading of the on-screen activity as tests or trials in some other unnamed investigation. Currently studying towards a BSc. in Natural Sciences, Annie Carpenter frames the labour of the artist as research and the product of their labour, the artwork, as experiment.

Paulette Terry Brien graduated from Dartington College of Arts in 1992 with a first class BA Hons degree. She moved to Manchester in the same year and since that date has been involved in the development and running of a number of artist-led initiatives and projects and is a co-founder and current co-director of The International 3. The International 3 is an exhibition and project space that presents a year-round programme of new commissions, exhibitions and events and represents a core group of artists selling their work and brokering exhibition opportunities. The International 3 also undertakes activity off-site and has been the curatorial coordinator for The Manchester Contemporary since 2010. Alongside this Paulette has also worked part-time and in a freelance capacity for a range of organisations including North West Arts Board (now Arts Council of England), Creative Industries Development Service and a-n. Paulette is regularly invited to deliver presentations in both education and professional development settings and is undertaking an MPhil by Research within Miriad at Manchester Metropolitan University.