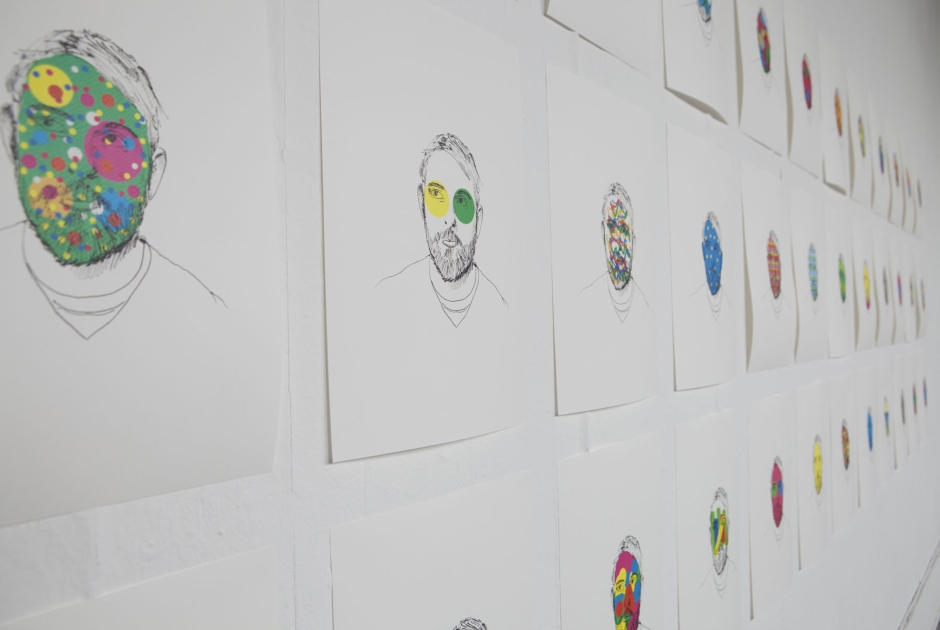 Performance is temporal and ephemeral, there one minute and gone the next. How is it best represented in a degree show? Only a single work by Andrew Gannon was consistently on display throughout Edinburgh College of Art’s MFA Contemporary Art: Practice degree show: 'Faces (Elements 10)' (2012). Three rows of 12 A3 drawings of the artist’s painted face were attached to one wall. This artwork was not labelled, and the performances – the main body of work – were planned, but not represented within the exhibition itself. Where was the work? 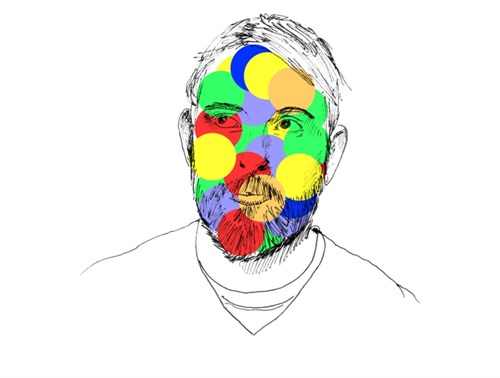 The first of these, 'Chair Work #1' is described on its poster: 'The work will be made by the four exhibition invigilators. Each, in turn, standing on their chair for fifteen minutes over a period of one hour.' Arriving at the performance, one expects to find one of the invigilators (the artists in the degree show themselves) standing on their chair for fifteen minutes. Yet the actual encounter with the performance was full of variants: the exhibition is the same, in that the same work is where it was yesterday, but the invigilators on their chairs all looked strange. Standing on a plastic chair for any length of time is odd. Bored or bemused, with their arms crossed or hands in pockets, each invigilator seemed more relaxed than I expected, but not entirely comfortable, sometimes yawning, sometimes looking at their mobiles, sometimes staring out into space. Perhaps each person became a living statue on a makeshift plinth, or the position magnified their symbolic power as invigilators of order and decorum, but no such pretentious interpretation was pushed onto the viewer. 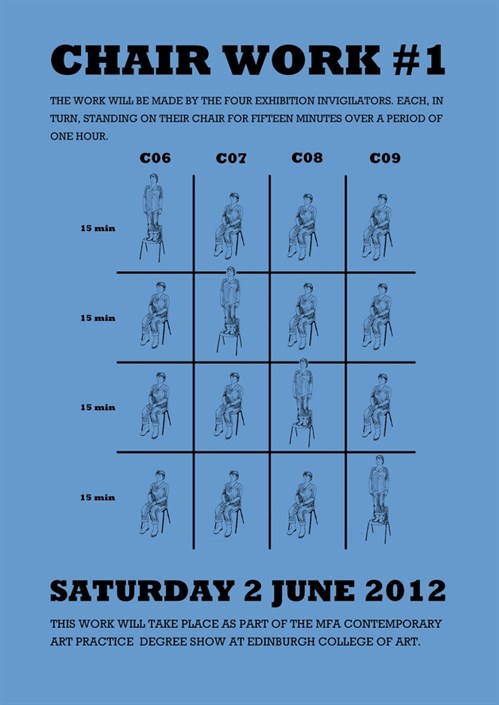 Although the other performances might have seemed more exciting (particularly 'Unrehearsed Rope Escape'), 'Chair Work #1' experiments with the physicality of the body and its dynamics in relation to the weight and mass of an object (the chair), with gravity having the same effect on body and object. A body in a chair does not attract attention; a body standing on the chair becomes something else altogether. The experience of the work can only confound expectations, but slightly, and in ordinary ways.

Gannon’s work is indebted to the work of a number of artists. Like Bruce McLean’s work, it is infused with a dry wit; like Bruce Nauman’s, it is hidden and inaccessible, as he thought performance should be : more of an activity than a product. But it might best be summed up in Bill Bollinger’s simple, direct works which exploit tension and gravity. Bollinger’s attitude to the making of his work might also be applied to Gannon’s work: ‘It is all very easy to execute, does not exist until it has been executed, ceases to exist when it has been taken down.’ But Gannon makes work that exists on its own terms, work that is temporal, ephemeral, and magical, like the best art.

Stacy Boldrick is Research and Interpretation Manager at The Fruitmarket Gallery, where she is responsible for programming talks and seminars and for writing and producing interpretative materials for exhibitions.

After completing an MA at the University of Pittsburgh and a PhD in History of Art at the University of Manchester, Stacy was Research Co-ordinator for the Henry Moore Institute in Leeds, where she curated Homes for the Soul: Micro-architecture in Medieval and Contemporary Art and, with David Park and Paul Williamson, she curated Wonder: Painted Sculpture from Medieval England. From 2002 to 2007, Stacy co-ordinated research projects between institutional partners in VARIE (Visual Arts Research Institute Edinburgh) and was an occasional lecturer at the University of Edinburgh. With Richard Clay she edited Iconoclasm: Contested Objects, Contested Terms (Ashgate, 2007). Stacy is an Honorary Fellow in History of Art at the University of Edinburgh, and writes about medieval and contemporary art.