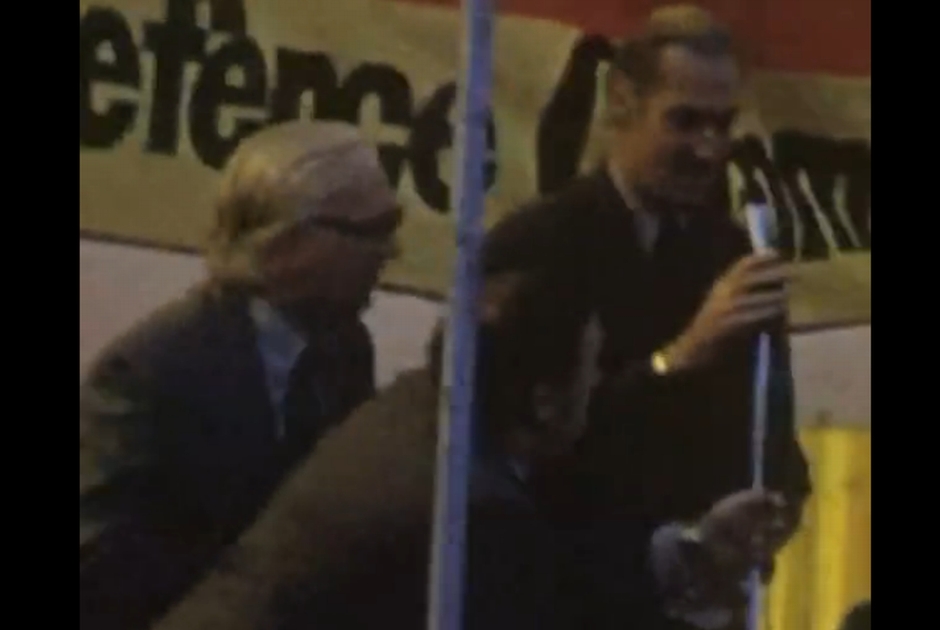 ‘The Acute Disaster’ (2012) is a short film comprising extracts of archive material that range from super 8 footage of Trade Union marches, to grainy black and white documentation of civilians running through the streets, ruined buildings and bomb sites, and bodies lying face down on the ground. The footage of the marches appears to be from the UK, and a banner reading ‘Paisley District Trades Council’ identifies the location of one of them. Other banners include references to Chile, indicating the origin of the more disturbing images, and establishing a relationship between the two countries.

Scans of a dense publication go by too fast to read anything but the author's name, but 'Hayek' is enough to reference the radical economic policies that contributed to Chile's troubles in the 1970s, whilst providing a context for the other less traceable images, such as a collection of raw copper rocks that suggest a connection to the Chilean mining industry.

The footage is paired with a voiceover gravely reading extracts from a manual on disaster management, which initially appears to be related to the content of the film, but turns out to be tailored to archives and libraries. However, the seemingly unrelated text provides a strangely appropriate context for the footage that we are presented with. Including phrases such as “emergencies are always imminent…” and “loss is regrettable…”, the words occasionally correspond with the content of the film and the references to libricide become increasingly pertinent as the film flicks through images of soldiers burning books in the street, and masked assailants dousing pyres with petrol.

As the voiceover talks of the destruction of history, the viewer is reminded of the vulnerability of the footage we see, and how the period of history we are confronted with could so easily slip from public consciousness if it weren't for the archives created to preserve them. The concept of protection and preservation is echoed by the context of the Trade Union movement, established to protect people and uphold their rights, while providing strength in numbers.

‘The Acute Disaster’ is presented alongside a much shorter film titled 'Casualties of History, Condemned in Their Own Lives', a quote that comes from the preface of E.P. Thompson’s influential history of the working class. This film is also a collage of archive footage, but this time the images are more nostalgic: a man strolls through a park, a woman poses to have her picture taken and a young girl feeds the pigeons. The footage is paired with a radio interview with an elderly man (who turns out to be Thompson himself) talking about his life and his relationship to these memories. As he reveals certain regrets, the footage starts to disintegrate until the image finally disappears, prompting the viewer to connect the frailty of the memory with the fragility of the film.

Aideen Doran, Casualties of History, Condemned in Their Own Lives, 2012. Video. 14 mins 4 secs

The two films are accompanied by a series of lithoprints bearing a repeated image of factory workers holding handwritten Cyrillic placards, in what appears to be a well-organised protest. The repeated image is surrounded by the names of various countries including USSR, GDR, West Germany and Poland, suggesting both the origin and the date of the photograph, and connecting it with these locations. Echoing the treatment of the footage in the film works, the repeated image is reversed, degraded and finally removed, creating a relationship between the physical decay of both memory and information. 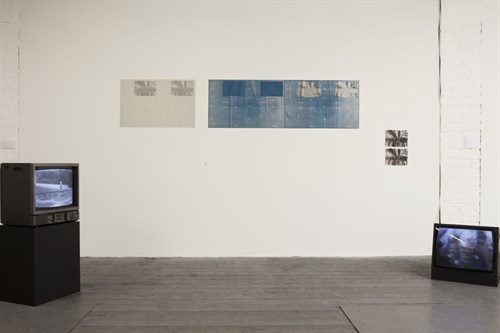 The works in Doran’s presentation come together to disrupt the standard thematic categorisation of the archive, recontextualising the material that has been retrieved and offering other possible narratives.

Kitty Anderson is Curator at The Common Guild in Glasgow. She was previously Associate Director of The Modern Institute, Glasgow, and Associate Curator of Frieze Projects, the annual programme of commissions, talks and education at Frieze Art Fair, London.

Recent freelance projects include 'One cannot go on saying but…', a collaborative project with artists Anne-Marie Copestake, Kate Davis, Rachel Lowther and Lorna Macintyre for 'Contradictory Woolf', The 21st Annual Conference on Virginia Woolf, 2011, 'Overlap', by Claire Barclay at Glasgow Print Studio for Glasgow International Festival of Visual Art, 2010 (with Siobhan Carroll), and 'FLATWORK', a publication exploring the presentation of two-dimensional work by sculptors, published in 2008, (with Vanessa Billy).

Kitty has contributed to a number of printed and online publications including PAR+RS, (Public Art Scotland), and PILOT:, and various selection panels and advisory groups including the Durham Cathedral Artist in Residence programme, freshfacedandwildeyed at The Photographers’ Gallery, London, 2010, New Work Scotland Programme at Collective Gallery, Edinburgh, 2009 and The Cartier Award, 2007.