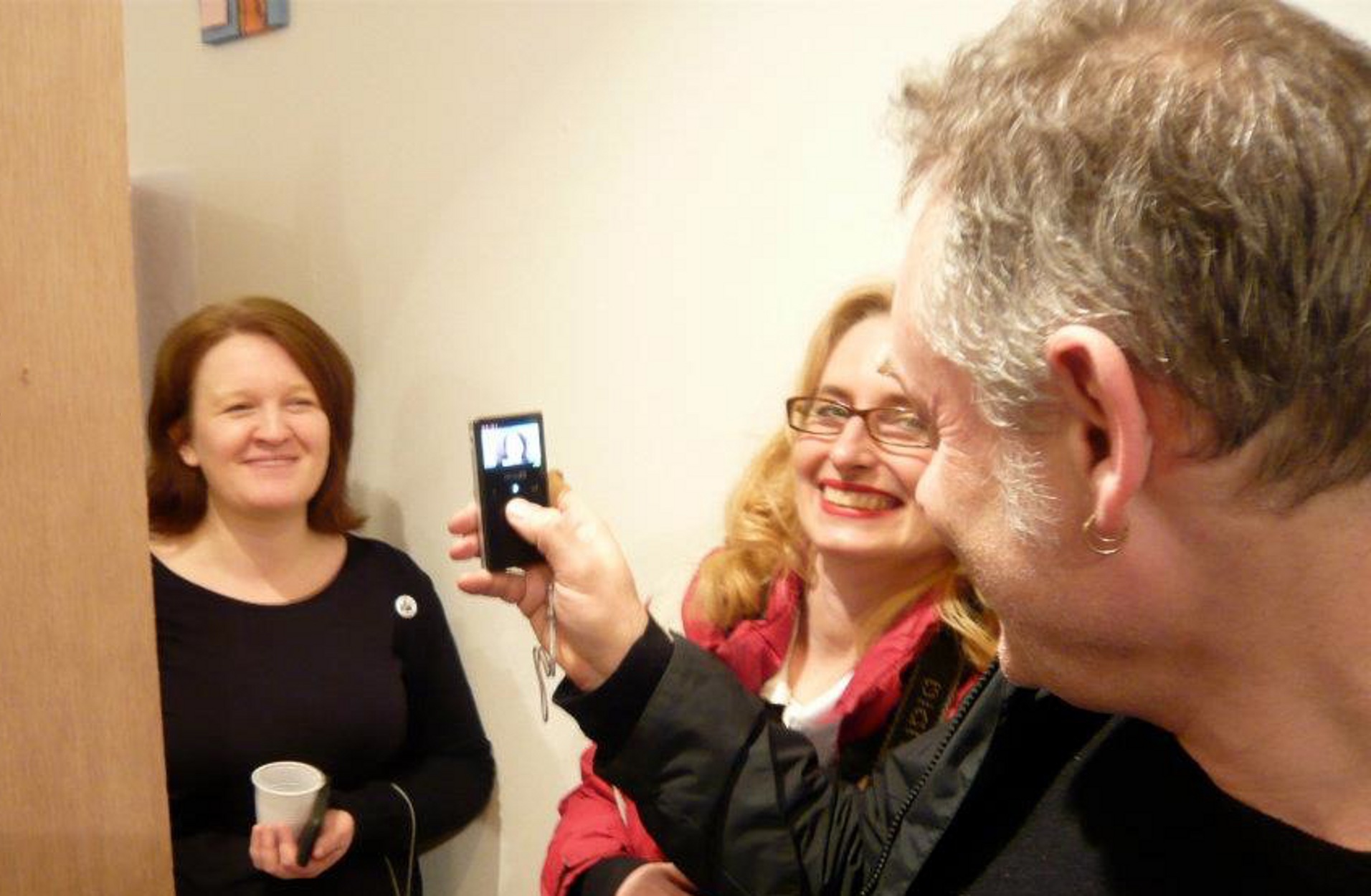 This month we feature Corinna Spencer who tells us about love, death and obsession in her painting.

CS: I like painting. For several years during my twenties and thirties I didn’t paint or make any art at all, which was pretty miserable.

RW: You’re very active on Twitter (Corinna tweets under the name of @Corr_). Who should our readers follow and why?

CS: There are lots and lots of artist-led galleries, artists and bloggers who are very active on Twitter. Actually @axisweb have started making Twitter lists and following lists can be a good way to browse and get started. I feel that it's best just to dive in and follow individuals or organisations that fit naturally with whatever you are interested in. Above all, have fun with social networking. I have seen collaborations and projects spring from Twitter interactions, which is great. 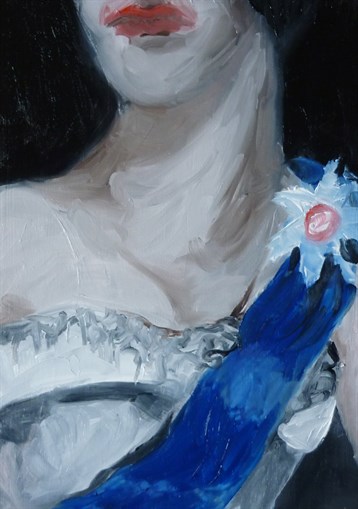 RW: What are the starting points for your paintings?

CS: I spend a lot of time looking at pictures, scrolling through Tumblr and keeping a look out for images that interest and inspire me.

They generally fall into categories of: Victorian women, fashion images from the 1930s onwards, advertising, old Hollywood film stills from films I may, or may not, have seen.

Once I have decided on a project or series of paintings, I scroll through and remind myself of the cut of a dress, a facial expression or a feeling I get from a film still.

A series called Restless was made because I had recently watched the film of the same name and loved it. If I wasn’t watching it, I was thinking about it, so I wanted to pick out some of the images that fascinated me.

Infatuation is a series of paintings of women with their back to the viewer, this is a series with a much broader sense of voyeurism and unrequited love.

CS: Obsession, love and death are themes that have been hanging about in my work for a long time.  Obsession became prominent in my work as I thought more about my own obsessions and interest in fandoms.

All of these are the areas of life that interest me, they are the films I watch, the books I read and the music I listen to. They don’t feel like big issues, more like everyday ones that we have all experienced or had to deal with at one time or another. 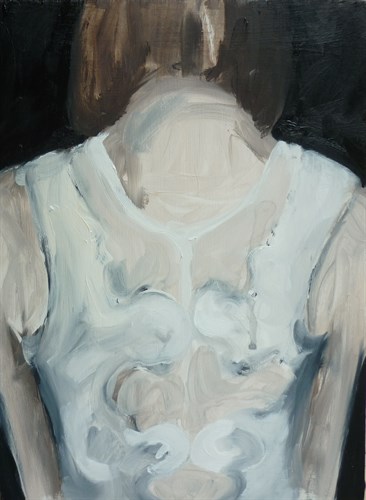 RW: Tell us about the art scene in the West Midlands. What's happening in Coventry?

CS: The West Midlands is varied and full of energy. The art scene in Coventry has had its ups and downs over the years but I think it's enjoying an up swing at the moment with artist-led spaces including Pluspace and Meterroom and dedicated, enthusiastic artists working hard in the city. 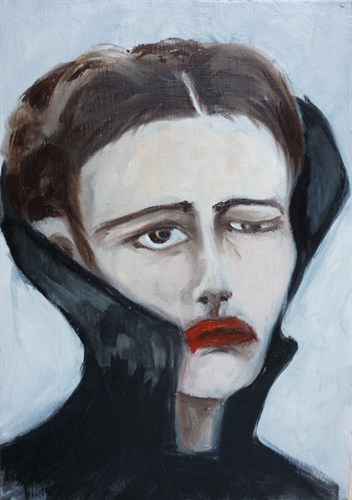 RW: Can you tell us about the forthcoming Sluice Art Fair. How are you involved? How do you think Sluice is different from other art fairs?

CS: Sluice is an art fair and programme of performance and discussion by artist-led projects and galleries from across the country. I feel it represents a more collaborative, experimental and realistic look at the art world with an approachable and honest attitude.

I am co-organising Transition Gallery’s The Dream Machine. There are eleven artists (including me): Kirsty Buchanan, Sarah Cleaver, Sarah Doyle, Paul Kindersley, Cathy Lomax, Alex Michon, Common Objects & Travis Riley, Alli Sharma, Charlotte Squire, Mimei Thompson, who have come together to create an installation inspired by the resurgence of black and white in the cinema, the magic of early film and the myths and darker aspects of old Hollywood and its Star Machine.

I will be showing work from a series called Hollywoodland which is broadly about the tragic ends suffered by some of those in the limelight and the fleeting nature of fame.

I am also taking part in Easel Painting: A Welsh Pavilion, which is a collaboration of Mermaid & Monster, Goat Major Projects and Outcasting. Alongside Bruce Asbestos, Kiera Bennett, Nicholas Carrick, Martyn Cross, Gordon Dalton, Terry Greene, Aly Helyer, Neal Jones, Yelena Popova and Brendan Lancaster, I will be showing some of my paintings from a large ongoing series of work about Edward VIII’s infatuation with Mrs Simpson.

RW: Tainted Love was a touring exhibition which you curated in 2012, involving 12 artists, exploring the theme of obsessive, one-sided love. What impact did it have on your practice, dealing with things from a curatorial perspective?

CS: Tainted Love started as a small idea for a series of work that, with encouragement, support and guidance from Transition Gallery, turned into a touring show.

I learnt a lot about working with other artists, galleries, local councils and funding bodies. It was a large project for a first-timer but it turned out to be the best way to gain the experience. I found that keeping ideas flexible and being open to collaboration was a real benefit to the show. Working with lots of people and having an excellent support system was key, remembering to ask for help was crucial and making mistakes, inevitable.

The project had a really positive impact on my work, as I think showing work does anyway. It helped to solidify some of my ideas and further develop others. I never really felt like a curator at any point and tried to use the word organiser, or something similar, as often as possible. We wanted to communicate a wide spectrum of ideas with the universal theme of obsessive and unrequited love, which I think we did.

Corinna Spencer is a prolific painter based in Coventry. Often focusing on female subjects, she gets her inspiration from historical images and films.

She has an MA in Fine Art Painting from Coventry University (2008).

Corinna will be showing work at Sluice Art Fair on 19 and 20 October 2013 in Bermondsey, London.