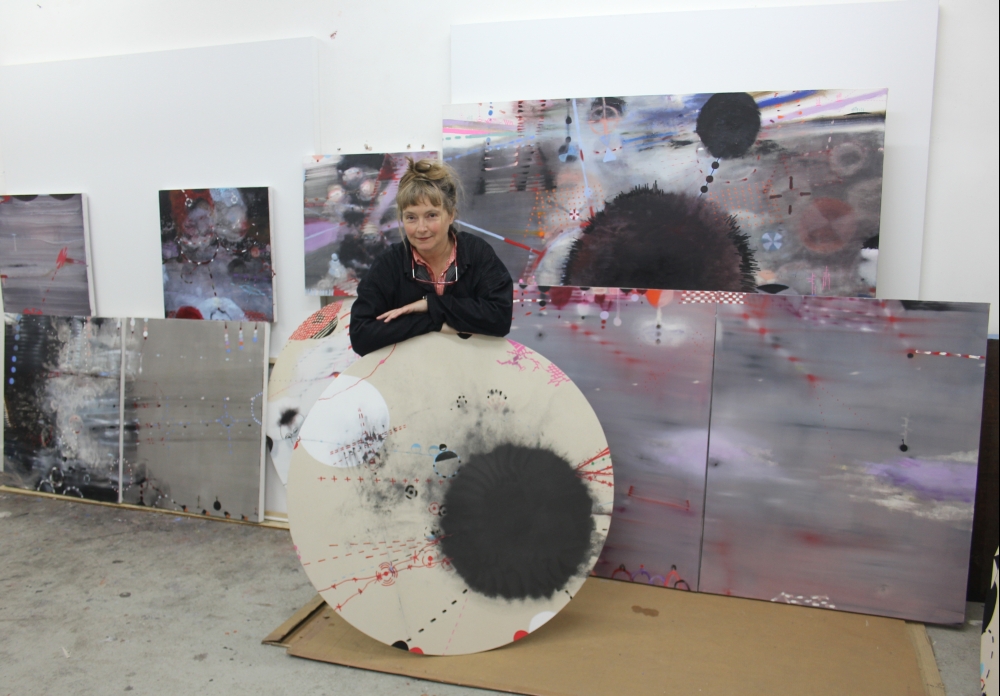 Virginia Verran in her studio

This month we feature Virginia Verran who tells us about combining drawing and painting, a sense of danger and the relationship between her body and practice.

Ruth Wilbur: Your work often combines drawing and painting. Why is this?

Virginia Verran: I began to draw again in 2009 in order to see if I could ultimately inject new information and detail into my paintings.  I found a way to layer space graphically using fine nib pens and this unleashed an intuitive stream of consciousness.

My studio is below ground level and I often think of the space below and above. I'm interested in sound, reverberation, and peripheral movement. Finding a visual language to allude to these sensations is the challenge. 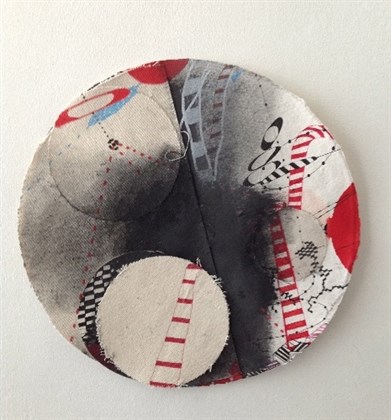 RW: You also use a number of distinctive marks and recurrent motifs. Where do these come from?

VV: I began a series of circular drawings when I undertook a residency at Cill Rialaig, County Kerry in 2009, one of which won the Jerwood Drawing Prize in 2010. In the series there was a clear response to the receding levels of space and the incredible beauty that I experienced.

I was aware, as I stared at the horizon line, of a sense of repetition of conflict through history. I felt a strong sense of the constant danger and threat to our equilibrium, both from outside our bodies and within.

The suggestion of flags, propellers, bombs, tracer-fire, meteorites, bacteria and cells in my work, play a roll as signifiers of that perceived threat but they also act as a formal device, motifs that sit on the surface of the space, playful and percussive. 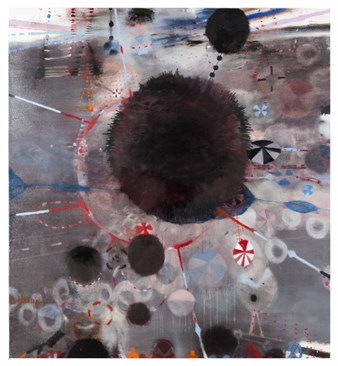 RW: You mentioned there a feeling of danger and things being finely balanced, how much does the subconscious play a part in the work you make?

VV: I am very conscious of our ultimate lack of control, of our precariousness, of the huge unseen pressures and rhythms in water, blood, the atmosphere and this is almost always present in the work I make. It is also reflected in the way I work with materials, I use chance and accident, the flooding of turps and linseed oil and then its removal to salvage light. The surface tension and light in painting itself is precarious too. 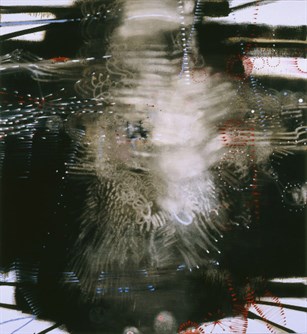 RW: Can you tell us more about how your own relationship with your body relates to your work? I know you were involved in an accident a while ago.

VV: Two years ago I had a bike accident where my collar-bone was very badly broken, and from which I am still trying to recover (I was knocked off my bike by a car door being opened on my way to my studio).

Over this period I’ve had two operations, with perhaps another ahead, and the bone still has what is termed 'a persistent deficit'. A term like this is very potent for my work, as have been many other references to the complex healing process in the body.

It has been and continues to be a very challenging and frustrating time since it has very much restricted my working process. As a result I have tried using graphite powder which is very gentle and immediate to apply. This avoids the strenuous rubbing back of the paint but creates difficulty preserving the light source. I'm concentrating on drawing more and making smaller paintings, working on a series of circular pieces.

RW: What was the last exhibition you saw that inspired you and why?

VV: There are two exhibitions which stay in my mind, Raw Truth: Auerbach - Rembrandt (on at Ordovas until 1 December 2013), a powerful experience from first walking through the door. Visceral, forceful landscapes and intense portraits by Frank Auerbach are coupled with tiny, intimate, glowing and immeasurably beautiful landscapes (and a portrait unknown to me) by Rembrandt. It's marvellous and covers much of human emotion and experience.

Last month's show at Charlie Dutton Gallery (Dan Coombs, Neil Tate and Mike Silva) also surprised me and left me feeling energised by what painting can do in terms of its power to get under your skin. It was irreverent, inventive and open-ended.

RW: What influences you and why?

VV: Listening to music with particular attention to percussion - I used to play the drums. Also fast travel, I spend a lot of time travelling on trains between London and Falmouth where I'm an Associate Lecturer on the Fine Art programme.  During this time I look up and around, the journey accentuates my awareness of space, movement and peripheral detail.

VV: Give a very wide berth to cars; metal and flesh don't mix

Virginia Verran is a painter based in London. She teaches at Falmouth University, Chelsea College of Art and Design and the Slade School of Art.

In 2010 she won the Jerwood Drawing Prize and has work held in a number of public collections including Arts Council England, Barclays Capital (Dubai) and Israel Phoenix Assurance (Israel).

Virginia will be showing work with Axisweb at the London Art Fair in January 2014.