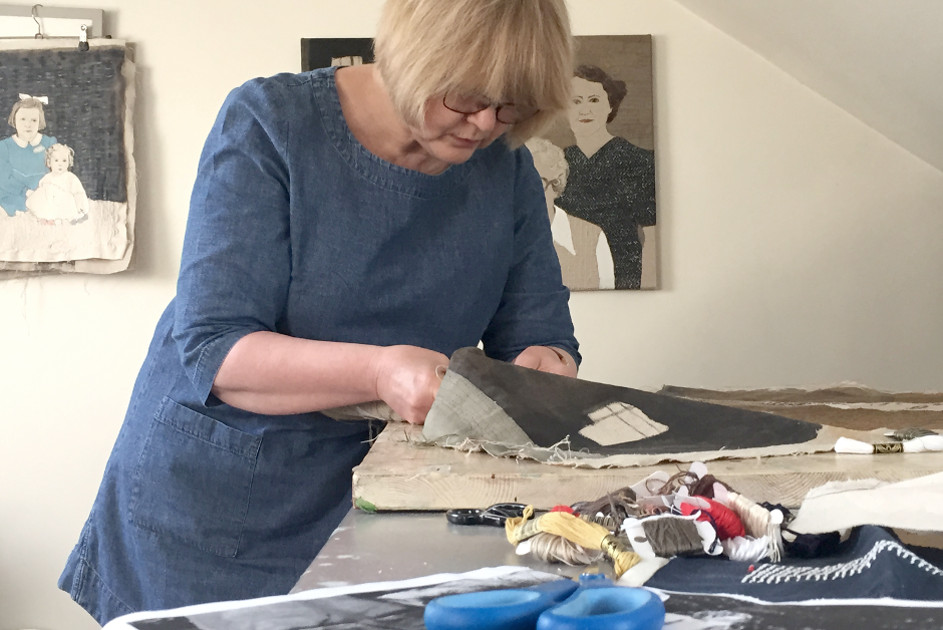 LG: Where do the ideas and images in your work come from? I’ve noticed there are a lot of fish…

Sue Stone: I make work about what I know and how it has affected me. I lost my mum to Leukaemia when I was in my 20s and I don’t have much of an extended family. I missed those bonds and have used images from my family album as a means of getting to know who I am and where I came from. I may be a few generations removed but my inherent strength of character is formed by the place I’m from, a fishing town where the women held home and family together and lived with the daily anxiety of their man at sea. I’m proud of my heritage and I use the fish as a symbol of that heritage.

My Dad was a fish merchant when I was a child and because of this I spent a lot of time ‘down dock’ . I have vivid memories of what was a ‘community within a community’ and some of my pieces mourn the loss of this close community brought about by the demise of the Grimsby fishing industry.

Sometimes my work takes on a more political stance. The morning news on Radio 4 is always a source of ideas. What I hear affects me and images from the family album are used, in this case, as a device to illustrate serious issues such as the plight of the the innocent child victims of war.

Since 2005 I have documented the area in and around around Grimsby St, London, E2 in photographs. I found an affinity with the area. It has something of the decay and dilapidation in the dock area of my hometown but also a unique character of its own. I began to find analogies between two different environments and two different eras and eventually my 1930s Grimsby Girls met London 2012.

SS: Quite simply stitch is my passion. Hand stitching into a piece of cloth and the feel of that cloth in my hands is for me a therapeutic process. I was surrounded by cloth and making as I grew up so textiles was the natural discipline for me to pursue at art school. My mum was professionally trained as a tailor so I learned to cut and sew cloth at an early age. I was really more interested in designing, which is immediate, rather than sewing which takes time. I found embroidery by chance later on at Goldsmiths college.

LG: Tell me about the 62 group of Textile Artists.

SS: The 62 Group is an artist led organisation and has an established international reputation for professionalism and quality of work and, since its formation in 1962, some of the most highly regarded British textile artists have been members. The membership is now international and is achieved through selection for initial (and continuing) membership and for inclusion in any 62 Group exhibitions. Each year new members are selected whilst others depart. Membership includes those with established international reputations as well as more recent graduates at the outset of their careers.

My own involvement with the 62 Group goes back to 1975 when I was invited by one of my tutors at Goldsmiths, Eirian Short, to join the group and I exhibited with them following year. Due to my business and family commitments I couldn’t produce work for exhibitions so I lost my membership after a couple of years. My textile work went on hold and I earned a living designing, manufacturing and retailing clothing for around 24 years. I started stitching again in 2002 and I was keen to become part of the 62 Group again. I applied for membership in 2008 and was selected. In 2010 I joined the 62 Group committee and since 2013 I have had the honour of being Chair of the group.

LG: Which artists working in textiles at the moment should we know about?

SS: Because of my own enthusiasm for stitching I’ve chosen two textile artists who work with stitch. Isobel Currie uses traditional stitches in an innovative and modern way to make three-dimensional forms. Her work creates continually changing perspectives which can be viewed from different angles to reveal the three-dimensional shape of the stitches.
Caren Garfen’s work combines methodical research with meticulous stitching and a sense of humour to convey her ideas about gender politics and the role of women in the twenty first century.

SS: I’m taking part in a couple of portrait exhibitions in the Autumn. One is in my hometown and is a self portrait show at the Fishing Heritage Centre starting at the beginning of September, the other Face the World is in Lincoln at Sam Scorer Gallery in October. At the moment I am some taking time out to make a new body of work exploring self and relationships with self, a kind of visual family tree. The piece I am currently working on is a self portrait made up of 63 images. I am also looking into the possibility of making a series of online courses and am writing a book to accompany this series of work which will be launched in 2016.

We asked Sue to pick some artists from the directory for a #Five2Watch. See who she selected here >

Interview by Lesley Guy
Published May 2015