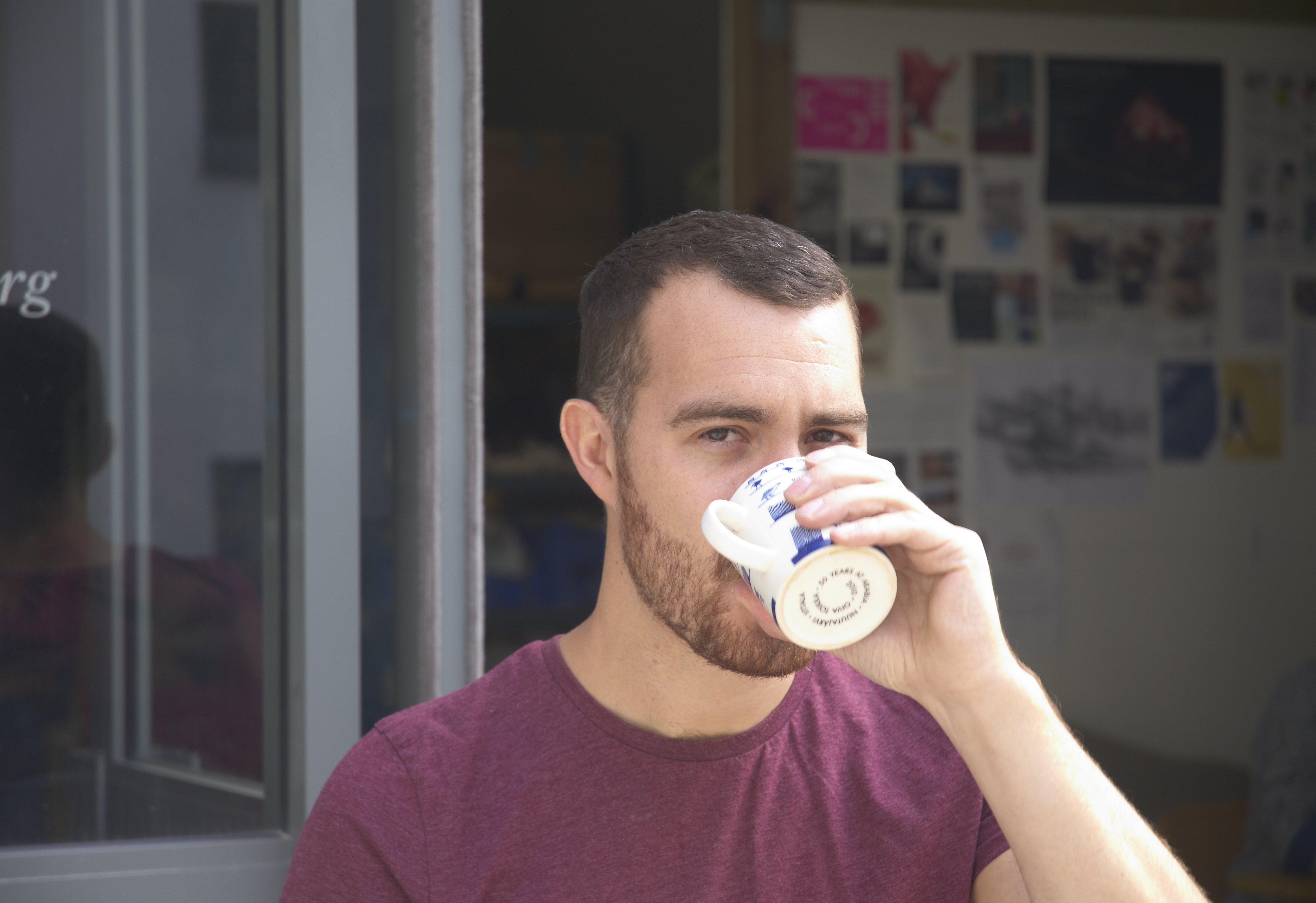 In June's Artist of the Month, Ruth talks to Zachary Eastwood-Bloom about collaboration, making work which sits between the physical and experiential, and the influence of his father, artist Norman Eastwood.

Ruth Wilbur: What are the challenges involved in making work which sits between the physical and experiential?

Zachary Eastwood-Bloom: It is quite a difficult challenge for me because I naturally think in terms of shape and form. Sculpture, for me, is about the relationship between the viewer and the object. Over time I've begun to think about shape and form from a more objectless perspective, for example what does a shape sound like? Can a shape's geometry be described in a different sense or provoke a synthetic response?

I've found that by taking a different vantage point when I investigate an object, I have more freedom to explore the object/experience in my own way. I tend to set up a process, almost like an equation where the final outcome is based on transforming the information I gathered at the beginning.

Zachary Eastwood-Bloom, In Memory of Objects, 2012

RW: You've worked with sound recently creating 'In Memory of Objects' (2012) and collaborated with composer Catherine Cheung to create ‘a human response’ to three-dimensional forms. Can you tell us more about this project?

ZEB: Yes, I 3D scanned a shelf of objects collected by the Modernist architect Ernö Goldfinger, at his former home in 2 Willow Road, Hampstead, a National Trust property. I then worked with computer programmer Will Robinson to create a computer programme that would read a 3D scan and convert it into numerical co-ordinates, these co-ordinates were then assigned a musical note depending on how high they were from the shelf, so as you travel along the shelf, a piece of music is created which is generated purely from the location of objects.

I then asked Catherine Cheung to compose a piece of music ‘reading’ the shelf as a score from left to right. She wrote a beautiful piece of music for string quartet that was performed at the show. I wanted to juxtapose a digital numerical interpretation of the shelf against a human response and what was really unexpected about the performance was that it brought back a strong sense of materiality that the digital sounds did not. There were also phases in the digital and human responses that were remarkably similar even though Catherine had not previously heard the digital sounds.

It would be difficult to map someone’s perception of something without some form of neuroimaging, and I am sure if I had worked with a different composer we would have had a different piece of music entirely. But I think that is what makes humans, their emotions and experiences so interesting.

RW: You regularly collaborate with people from other disciplines when creating work, don't you?

ZEB: Yes, I really enjoy collaborating with people from different disciplines, you get a fascinating insight into how other people think. Like I said earlier, I tend to think in terms of shape and form but people like Catherine (who I worked with on the Memory of Objects project) think in sound and Will Robinson, my programmer friend, can think in computer code.

I'd like to kick-start a project in the future which starts with something, say a drawing, which then gets passed on to a writer who writes a text which then gets passed onto a composer and so on. As a project, it would be interesting how people would translate the starting point into their own medium of understanding and how that might transform and evolve as the process continues with each individual person. Working with different people always brings different points of view and I like to see different perspectives of the same thing.

RW: You’re co-founder of Studio Manifold, a group based in East London. Can you tell us more about it?

ZEB: I think moving to London and studying at the Royal College of Art (2008 -10) was a massive catalyst for my work and it really kick-started where I am now. I was really fortunate to be in a very tight-knit class. As we began to get closer to our graduation, we quite naturally formed a group who started to think beyond our final show and set up a studio. We knew we wanted it to be more than just a space and were keen to have a collective identity, even though we are nine individual artists, designers and makers. So we came up with a name, made a website and had a party to signal our beginning. The team is Ellie Doney, Hanne Enemark, Amy Hughes, Sun Ae Kim, Bethan Lloyd Worthington, Hanne Mannheimer, Ian McIntrye, Matthew Raw and me. 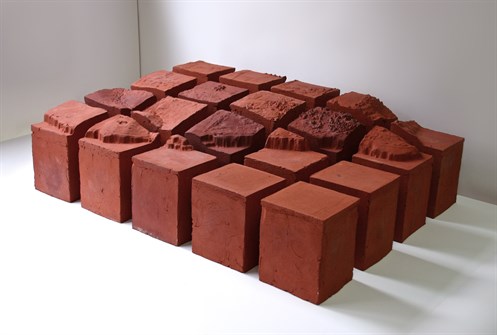 RW: You mentioned studying at the RCA where you studied for an MA in Ceramics and Glass. What made you move towards working more with digital processes?

ZEB: I suppose that the further you go through the education process, your focus becomes more acute, but for me going to the RCA was the opposite, it opened everything out for me to explore again. When I was there, I experimented with lots of different processes such as bronze casting, electroforming copper, CNC milling, 3D printing and even writing code. I went into the place wanting to become a highly skilled ceramicist but came out with far bigger ambitions. Knowing how to make in clay is very useful because it can transfer into so many other processes and materials. I was very keen to use digital processes because outside of an educational institution it is difficult to get a basic introduction to how it all works ad it is quite a change when you have been making purely by hand for the previous ten years. I became fascinated by digital processes and the way they can both benefit and hinder, both socially and artistically.

RW: You’ve just been shorted listed for the British Ceramics Biennial Award and are competing against 22 other ceramicists for a £10,000 prize. What work do you have planned for the show?

ZEB: I have been experimenting with capturing 3D models of classical busts. Using the models I have captured, I shall be exploring how computers 'think' in three-dimensions, using and playing with the polygons and vertices that computers use to construct in virtual space. I am interested in the notion of human progress, so I am taking something clearly historical and rebuilding it, using new technological processes and then casting it into clay, a material humans have been making with for 10,000 years, for a show of its contemporary use. It's like some kind of feedback loop.

RW: What intangible experience would you most like to see re-interpreted/visualised?

ZEB: Taste, but I have no idea how to do it. The Institute of Making at University College London did this great project where they made seven spoons from seven different metals such as copper, zinc and gold, ate food from each spoon to assess how the metal affected the taste. I think that is a fascinating project, they did something similar with different metals and tuning forks.

RW: Who influences you?

ZEB: I have been thinking about this a lot recently as Studio Manifold are curating a show at the Siobhan Davies Studios in London and I have chosen to exhibit a piece by my father Norman Eastwood. As a child I would go to sleep to the sound of my father making in his workshop in the attic; mainly the sound of band saws, drills, him dropping things and various expletives. He is a very good artist who has very little ego, he made for his own satisfaction or need and never seemed too bothered about showing his work. He is now 78 and still making but his hands are not what they used to be. His influence on my work and how I work has been significant, we both share a sense of tidiness, order and a love of architectural shape and form. However I come from a very different generation, my father has never owned or touched a computer where as I explore digitisation in relationship to materiality, my computer is one of my main tools. I wonder what he would have made were he my age now.

RW: What do you love the most about what you do?

ZEB: I don’t think I do what I do because I love it, I feel like I have to do it, I am not sure what I would do if I wasn’t an artist but I know that I couldn’t work in an office 9-5. I love that even though I might have an idea in my head of what I might be doing in couple of years’ time the probability is that I’ll be doing something I didn’t expect. I never imagined working across lots of different disciplines like dance, sound, music or even science. I never expected to be using digital processes to make sculpture. I have also just had a son, Finlay, who is now 5 weeks old, so I am in a pretty happy place right now, everything is slightly rose tinted.

Zachary will be exhibiting as part of Studio Manifold at the Siobhan Davies Studios, London from 5 July - 22 September 2013. The collective will be responding to the space, with a curated show,

You can also see Zachary's work on show at The British Ceramics Biennial taking place in Stoke-on-Trent from 28 September - 10 November 2013.

Zachary Eastwood-Bloom is a London based artist and founding member of Studio Manifold, a collective, collaborative and co-operative studio of artists, designers and craftspeople based in East London.

Zachary creates sculptures that explore the space between the physical and experiential using digital processes such as 3D mapping.

He graduated with an MA in Ceramics and Glass from the Royal College of Art in 2010 and has recently been shortlisted for the 2013 British Ceramics Biennial Award.