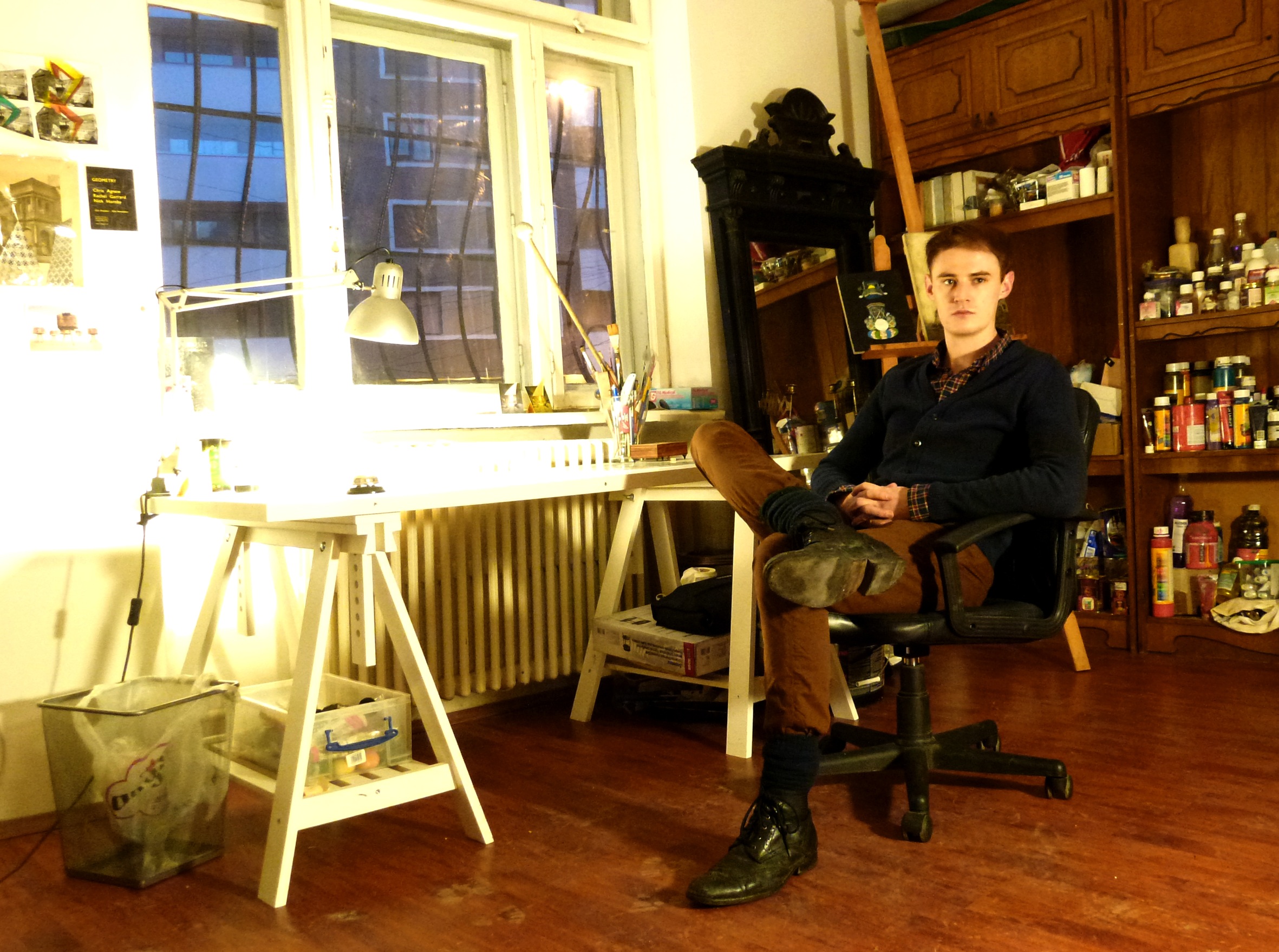 In our first Artist of the Month for 2013 Ruth talks about etching, Friedrich and Romanian icons with artist Chris Agnew.

Ruth Wilbur: What was the last exhibition you saw that made an impression on you and why?

Chris Agnew: I split my time between London and Bucharest and at the moment I’m mainly in Bucharest. I visited the Romanian National Museum of Art for the first time a few weeks ago and it made quite an impression on me. At the time I was meandering between projects and was looking for some direction. The collection and quality of medieval paintings and icons is possibly the best I’ve seen anywhere.

I find it incredible how some medieval paintings can look so modern and dynamic, whilst re-telling a story that has been told a hundred times. It's the repetitive nature of the compositions, signs and symbols that I find so refreshing to observe, because it is in such stark contrast with the capital-driven ‘originality’ that dominates most contemporary art galleries. It’s reassuring to know that you don’t have to re-invent the wheel to make good art.

RW: Tell us about your starting points and source materials, do you work from photographs?

CA: Where possible, I will try and visit the locations that I’m working with and photograph the scene myself. I’ll even do some preliminary sketches on site if I can. A few years ago, I convinced my parents to drive 10 hours with me to a location that I was making some work about. I spent at least five of those hours outlining the ideas behind the project to my mother, and it was then that I realised how important it was to put in the effort with research and source materials; you have to make a pilgrimage to the idea before it will let you use it. It’s too easy to take images and information from the Internet for granted and this is a lazy habit to fall into. There has to be a relationship between the artist and the subject.

That said, when it’s impossible for me to visit the site, I generally try and strike up a conversation with someone who has been there and ask to use their photos. I’ve done this several times, and have come away with more than I could have asked for. 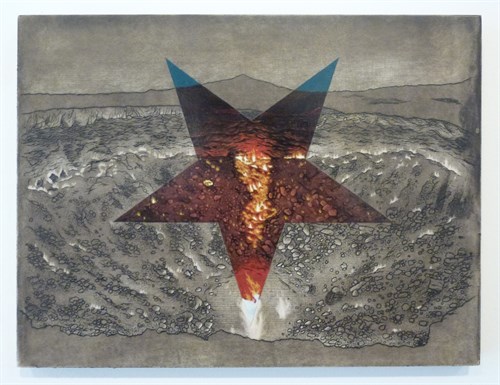 RW:  Your work combines painting and etching. Can you tell us about the process of making the work? I notice you etch into resin as well as etching on wood panels.

CA: I studied etching during my BA at the University of Leeds. As I became familiar with the process, I noticed that the ink on the plate before going through the press actually appealed to me more than the final print. The hand of the artist was more present on the plate than it was in the print and I instantly understood this as an important feature in my practice.

When I began my Masters at Wimbledon, I developed this idea further. I was researching a lot of Mayan history and prophecies throughout my MA, and resin features significantly in the creationist text, the Popul Vuh. I began casting my own resin blocks and etching directly into these, rubbing oil bar into the lines and adding painted details. My work which uses this technique was shortlisted for a number of prizes including the Jerwood Drawing Prize and Saatchi's New Sensations.

Since then I have made a change from resin to primed wooden panels which allows me to give the etchings a painterly texture that wasn’t possible using the waxy resin and has enabled me to be a little more creative with my compositions, as light and shade are easier to handle on this surface.

RW: And what prompted you to start working with icon panels?

CA: I actually began working with the icon panels when I first came to Romania; most houses, regardless of the religiosity of the occupants, have an icon or two in them and this caught my eye. I’m interested in how corporeal objects and locations assume the role of an ideological vessel; locked in this world to speak of another one. The icon panels are used in this way, the panels aren’t seen as just paintings, they are treated as sacred objects themselves, a little glimpse of eternity.

When I began working with the panels I was quite conscious of the fact that it might look like a frivolous hijacking of a tradition for my own purpose, but that’s not how it is, the medium can be understood as speaking about the sacred nature of art rather than religion. Icon panels mean many things to so many different people. Understanding how they operate as vehicles for my practice is important, but I also subscribe to the notion that a little pinch of mystery will keep the blood pumping and I don’t want to kill that with answers. 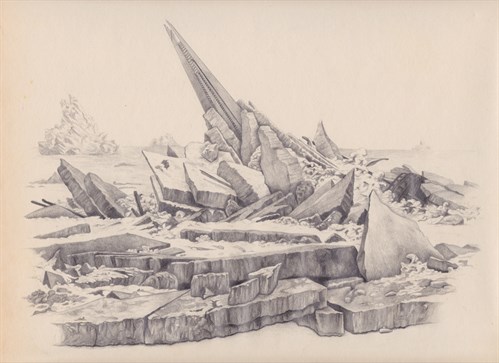 RW: Your work 'The Road we Took to Avoid It' (2012), places the Shard within Friedrich's Sea of Ice.Could you tell us a little more about your intervention with this iconic work?

CA: The title of the drawing is pulled from a quote by the Seventeenth Century Fabulist, Jean de La Fontaine, who wrote that ‘a person often meets his destiny on the road he took to avoid it’. The intentions of the piece were to form a sort of tongue-in-cheek commentary on collective destiny. I had wanted to use Friedrich’s Sea of Ice for a number of years; the painting to me is a perfect illustration of how immense power and energy can be manifest so silent and tranquil, that’s something very hard to capture.

It wasn’t until I was reading Slavoj Zizek’s Living in The End Times, which features a monochromatic Sea of Ice on the book jacket, that I saw how the work was going to unfold. The drawing is of a people meeting their destiny on the road they took to avoid it. It doesn't matter whether you believe it was the destiny that had been chosen for them, or the one they had unconsciously chosen for themselves. Prophetical works like John Martin’s Apocalypse paintings have always intrigued me and this was me putting my card on the table.

CA:  I think that it’s important to monitor the pace, successes and failures of your own practice independently, whilst accepting other opinions objectively. It's easy to become too concerned with what everyone else is saying about your work, or to pay too much attention to sales. I’ve only really been selling my works for about seven years so I’m not pretending that I have the answers but it's my honest opinion that if you let the sales of your works dictate your practice (commissions and residencies aside) that’s the start of a slippery slope. Some of what I consider my most successful works have taken years to find a buyer, whereas works that I considered to be flawed have sold straight away, so I don’t think formulas are that easy to apply.

Chris Agnew spends his time in London and Bucharest. He explores the historical connotations of events and places in minutely detailed works which often combine etching and painting. Chris has exhibited widely in London and was shortlisted for the Jerwood Drawing Prize in 2010 and 2009.