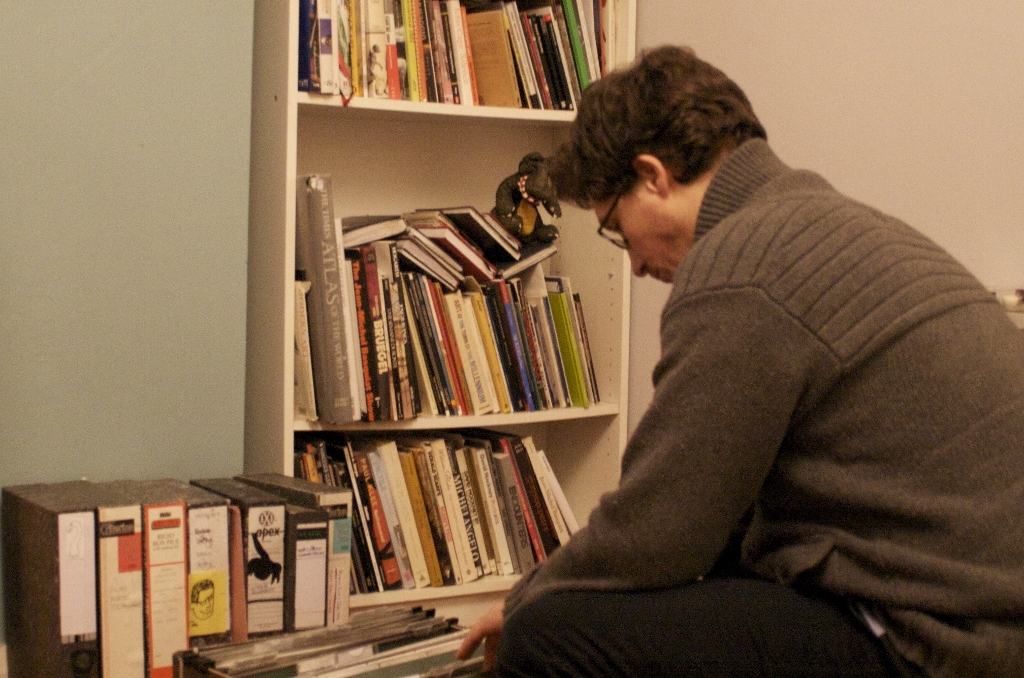 In February's Artist of the Month, Ruth interviews Thomas Goddard about the murky beast of Lake Bala, working with text and image, and his twitter name @ohmygodtom.

Ruth Wilbur: You're recently been working on an online archive documenting the existence of Teggie, a lake monster reported to live in Bala Lake, Gwynedd, in North Wales. Have you found evidence of the murky beast?

Thomas Goddard: The project was funded by Arts Council Wales and enabled me to do extensive research identifying, gathering and analysing information relating to Teggie. There have been plenty of sightings of Teggie over the years, all following a similar pattern.

Wales is, of course, steeped in myth and legend. There is a quote from Mary Trevelyan's Folklore and Folkstories of Wales about Bala lake saying that "it is bottomless". Centuries ago an expert diver tried to explore it but was terribly frightened by his experience. He asserted that a dragon was coiled up at the bottom of the lake and if he had not been very careful, the creature would have swallowed him.

My body of research and archiving is not about making Teggie into a star or creating tourism for the Bala area, but about examining the fundamental human need for myth and legend. I also think that, in many ways today, the believable and unbelievable have become the same thing: any view point can be as good as any other. 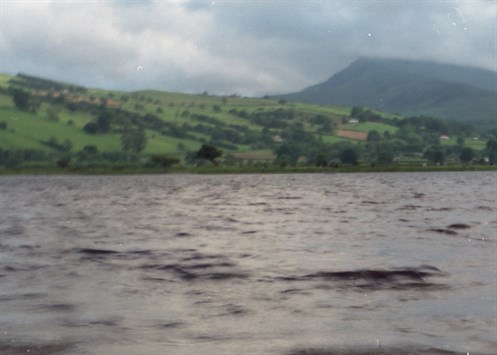 The archive I have created explores the history of the beast of Bala and is a point of interaction for further research and investigation. There is a suggestion that the archive is in fact satirising the institution of the museum by collecting and presenting something that is widely refered to as unreal in an official way.

RW: You mention above the idea of satirising of the museum. Much of your work seems to poke fun at... almost everything, the art world, politics, the way we historicise events...

TG: I’d say that’s fair, there is an element of poking fun in what I do, but I layer all my works and projects with a range of possibilities and outcomes. It’s my intention for my work to be read in different ways, I see that as part of my job as an artist, and of course laughter can be very close to fear. I mean, I like making things up but I also like facts, black on white, and straight lines.

RW: You're the Director of Cerbyd. What are the aims of this initiative?

TG: Yes, I am the Director of Cerbyd (Welsh for vehicle), an initiative that unites artists through travel, shared activity and dialogue in a micro-territory far away from art galleries and conventional art environments.

In 2010, we selected 10 artists to travel on a sort of Welsh odyssey exploring the rituals and customs offered by the different societies we met. Groups included the North Wales branch of the George Formby Society, Aberystwyth Quizzers and Chirk Writers Circle, all of whom welcomed us and shared their skills. We encountered such passionate people, it created a world that all involved in Cerbyd found it hard to step out of.

In my practice I try to create projects that give me an opportunity to learn or work within a range of fields outside the arts. I am interested in the dialogue that is created. Since the trip, the group have become a network that share their practice and collaborated on a limited edition book in 2011. The closeness of the group fundamentally comes from the significant and challenging journey we all shared. It's my intention to do Cerbyd mark II in Europe and a third incantation further afield, maybe the moon! 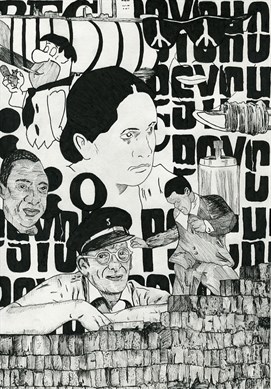 Thomas Goddard, From Ape to Adam to Apocalypse, 2013

RW: A lot of your work has a strong graphic quality to it. Can you tell us about the relationship between text and image in your work?

TG: I like to mix word, text and image. Black marks on a white background, different sizes and shapes. I’ve been thinking a lot about the way text is read, specifically in the series like 'From Ape to Adam to Apocalypse' (2010- 2012), and realised that association plays a huge part of reading. So where in one of my works it says 25 Cromwell Street, the association is one of grisly murder and Fred West, but if you were unaware of the reference, then it would be a very different experience. I’m encouraging people to shift their attention, and the meanings become self-referential, based on personal memory and experience as well as your general knowledge. From Ape to Adam to Apocalypse is meant to be a bit like a pub quiz and I’m the quizmaster.

TG: Yes, The work comes newspaper cuttings published from 1898 to 1999. I began with the year 1999 as it promised my young self so much, from flying cars to elaborate robotic contraptions. I use the golden section - employed by artists and architects since the Renaissance as a way of working out proportions that provided a pleasing aesthetic image. The series consists of 101 A4 ink drawings and plays fast and loose with the truth sometimes (or does it?). Is the truth misremembered or manipulative because of what is left out?

TG: My father has always given me newspaper clippings. One such clipping detailed a series of uses/slang terms and euphemisms for my name. For example, Tommy-Rot being slang for someone talking rubbish or a Peeping Tom as a male voyeur. Ohmygodtom was my attempt to make a contemporary version for my own surname of Goddard.

Thomas Goddard is currently showing his work From Ape to Adam to Apocalypse at Chapter, Cardiff until 10 March 2013.

You can find out more about the Beast of Bala and visit the archive website Thomas has created at www.beastofbala.com. A limited edition risograph publication of the project, made in collaboration with Nick Davies as part of LoopholeSupplements platform will be available in early February.

Thomas Goddard’s diverse practice explores the relationship between the individual and society and the impact that media misinformation has on contemporary culture.

Thomas is based in Swansea, works part-time as Learning Officer at the Glynn Vivian Art Gallery and recently received a Marsh Award for excellence for his work in gallery education.