Rant 89: Throwing The Baby Out 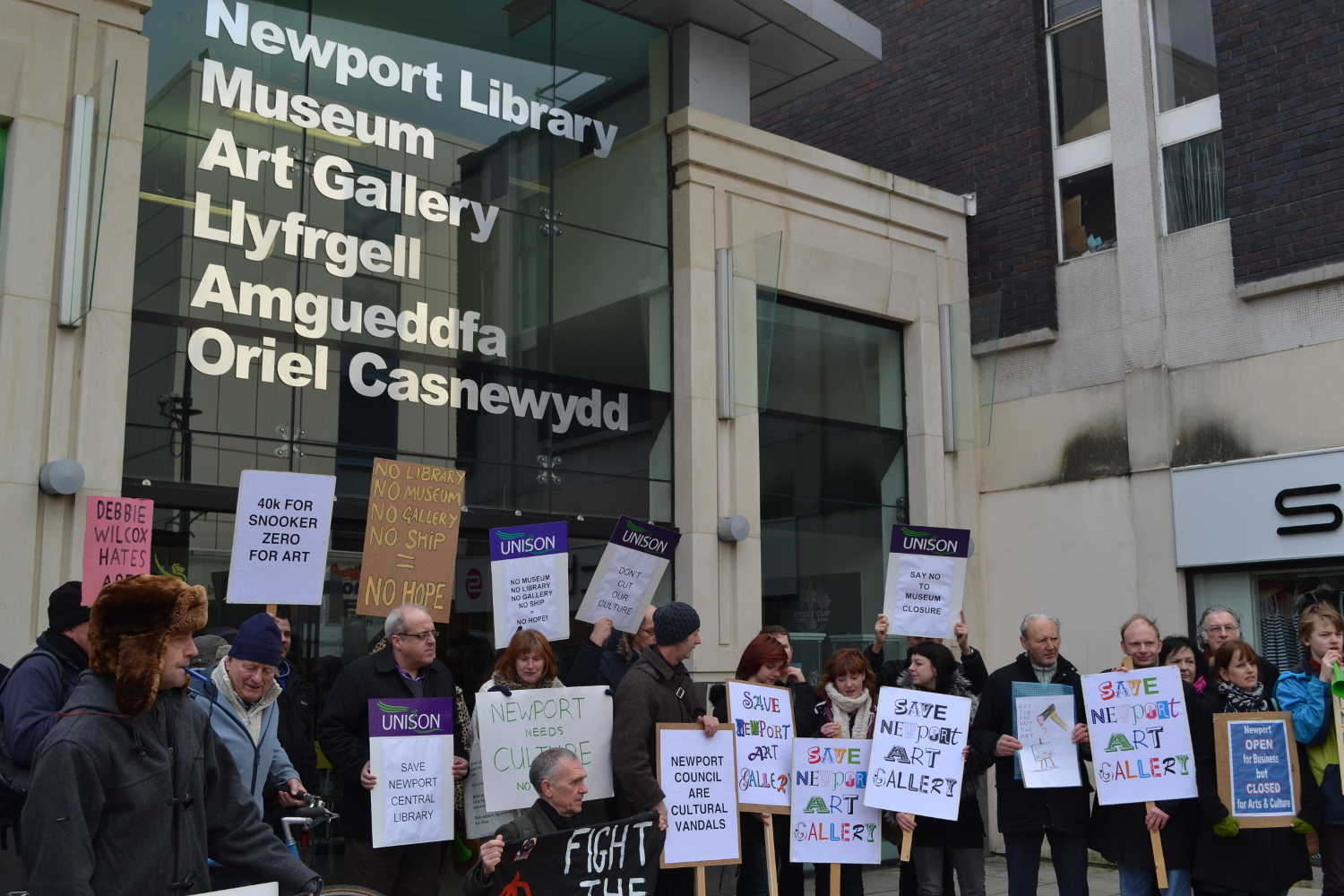 The people of Newport demonstrating against the cuts. Courtesy of Emma Geliot

Now that Newport Council have rubber stamped the decision to close the temporary exhibitions programme at Newport Gallery, we've asked Emma Geliot to fill us in on the details, and let off some steam at the same time.

When times are tough some local authorities seem to panic their brains right out of their skulls. In calmer moments everyone knows the arts are vital for: social cohesion, learning, regeneration, graduate retention, tourism and, goddammit, entertainment - lifting the mood or working the brain.

So why, when the economic thumbscrews are on, do councils forget and see art as a soft, non-statutory target for lopping?

Not all though. In Wales, safely away from Westminster, most councils have hung on with minor twiddles around the edges and percentage cuts, transparently proposed. Cardiff’s decision to swipe a 43% chunk from Chapter’s funding seems mean, until seen in context – a big percentage of not very much compared to the annual turnover of Cardiff’s arts centre. And at least they’ve kept faith with the smaller artist-led organisations who make up Cardiff Contemporary, and who struggle to access other funding.

Powys has never had much to spend, Swansea seem to be sticking with their arts support, particularly for regeneration, and it’s paying off. But Newport...

...A behind-the-scenes decision to axe the temporary exhibitions programme (and ultimately close Newport’s museum, art gallery and library) led to public outrage in a city more blighted than most by the recession. Instead of a contemporary programme of art for all to enjoy, there’ll be more shops and the usual multiplex cinema (which, by the way, will pull the revenue rug out from under The Riverfront's feet).

Worryingly, without a clear steer from Welsh Government (who’ve downgraded the arts to a footnote in the Housing , Regeneration & Heritage portfolio), other councils may follow suit. When all of this is over, I wonder who’ll sit down with a calculator and work out what’s been lost and how much it’ll cost to replace it?

Contributed by Emma Geliot
Emma is a freelance journalist and Editor of Culture Colony Quarterly (CCQ) magazine. She was Senior Visual Arts Officer for the Arts Council of Wales but left to retain as a journalist at Cardiff School of Journalism, graduating in 2010.

Our Associate in Wales, Alicia Miller, also worries about the cuts in her Notes from Wales

The views expressed in The Rant are those of Emma Geliot and forum contributors and unless specifically stated are not those of Axisweb. See our terms and conditions