The Influencers: Tony Charles, Director of Platform A 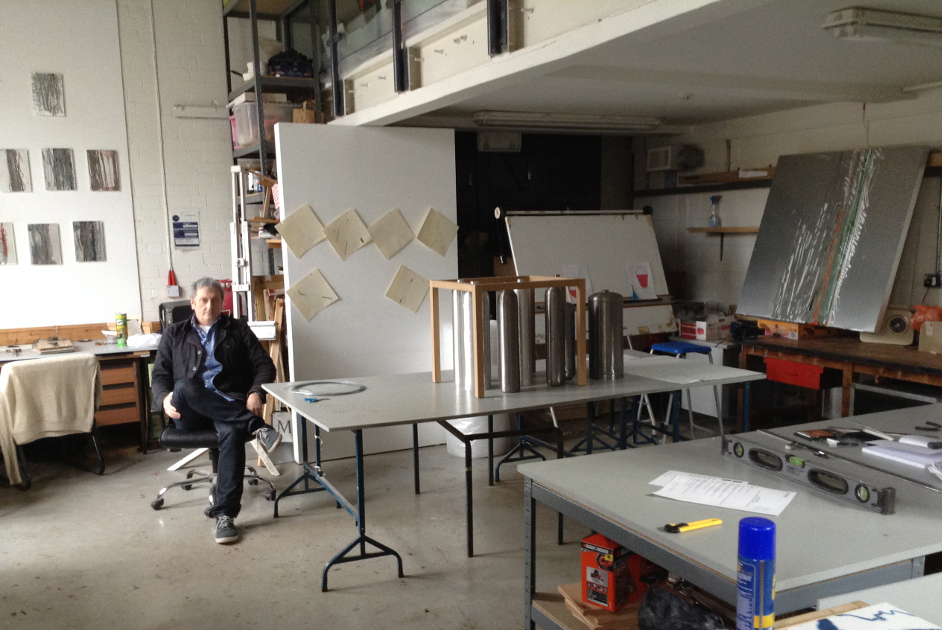 Tony Charles in his studio at Platform Arts in Middlesbrough

Tony Charles runs one of the most unusual contemporary art spaces in the UK. He tells Lesley Guy the story of Platform A at Middlesbrough railway station

Lesley Guy: What is the art scene like in Middlesbrough?

Tony Charles: It’s quite a burgeoning scene with lots of potential. I think the art projects and the organisations that are appearing are part of a growing ecology and while it may not be as large as other creative centres, it’s very strong. All of the organisations are willing to help each other, including the flagship mima.

LG: And how does Platform A fit in?

TC: Four artists, Andrew McKeown, Adam Baldwin, Lorraine Brown and me, set up a studio group just outside Middlesbrough in 2000 and were attracted into Middlesbrough by the vision that the local authority had at the time. mima was about to be built and there were large projects such as Anish Kapoor’s 'Temenos', so we saw the benefit of the growing artistic atmosphere.

To cut a long story short, we managed to negotiate purpose-built studios at the railway station which now accommodate 14 artists. Platform A gallery was an extension to this and was developed to satisfy a need to create a serious space for critically engaged art in the region.

We wanted a gallery that would have an outward-looking international focus and support the careers of artists and contribute to the regional arts ecology.

Platform A is actually situated on Platform 1 at Middlesbrough station. You can literally step out of the gallery door and onto a train, so that means there's a massive potential to attract a much wider section of society. Having something to see while waiting for a train is a huge plus.

LG: It’s a beautiful space. Did it take a lot of work?

TC: Well, that part of the building was derelict so we had to renovate it. There were these beautiful big windows as part of its facade, but the inside was derelict, so we managed to attract some funding and get a lease from Trans-Pennine Express, who is our landlord.

We had to put a new floor in and some walls. The floor is screed-coated with a concrete sealant. Its appearance seems to maintain an industrial heritage which I find interesting, in contrast to the 'white cube' effect of the walls. 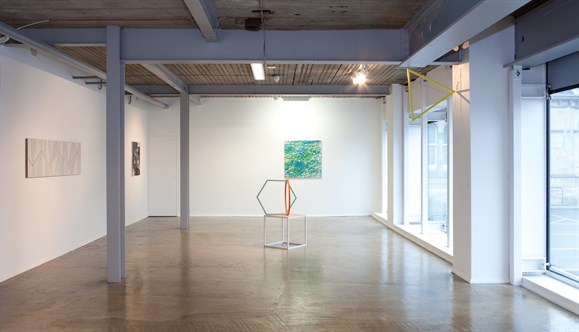 Intallation view of Making Matters at Platform A gallery

LG: What about your background. How did you get into art?

TC: When I left school I was advised by my art teacher to go to art college and against this advice I followed my peers into the steel works. I spent some time travelling as a contractor in the steel construction industry and I knew as soon as I’d taken this direction that it was the wrong one for me.

Eventually I left the industry and went to study fine art, did my BA and my MA and as time went on industrial references began to creep into the work I was making and it ended up as something that very much underlines my practice now - especially still living in an industrial region. That influence has remained ever-present, I guess.

LG: Your work definitely has those industrial elements. Could you say a bit about what you do?

TC: I’m quite fascinated by the relationship between two and three dimensions and the shifting parameters of painting. When I make sculpture I seem to be thinking about painting and when I paint I think sculpturally. I think the underlying industrial reference is a unifying element that affords me a little bit of diversity at times.

Recent work has involved industrial-sized paintings on aluminium that are then ground off using an angle grinder. These 'unpaintings', as I call them, are exploring abstraction and also exploring the question of how they should be viewed - whether as abstract paintings or as objects that present an industrial process.

LG: What is a Fettled Form?

TC: Well, fettling is another term for grinding in the steel industry, as is dressing. I have various paintings that refer to this with titles such as 'Informally Dressed', 'Formally Dressed' and 'Dressed to Kill'; then there's 'Fettled Sign' and 'Fettled Form' which have the same meaning really.

LG: That’s interesting because in the part of the North East I come from the word ‘fettle’ refers to an emotional state.

TC: What fettle? Yeah, I guess it has a link, because it means are you in good shape? Are you tidy? And the process of fettling is for tidying up. It’s grinding rust or paint off steel or grinding welds to make them look better.

LG: What plans have you got for the future of Platform A?

TC: We need to become self-sustainable and survive on sales - that is the ultimate aim. The main objective is to develop a market in the region as well as internationally, which is not an easy task especially in these economic times. Essentially, we want to strengthen what we do by attracting our own revenue.

TC: The first thing I'd say is ‘be selective’. I think being non-selective doesn’t do any favours for artists whatsoever. I don’t think it encourages artistic focus or progress, so have a good idea of what you want to achieve and select appropriately. You're never going to please everyone, so don’t even try!

We asked Tony to pick three artists from the directory and say a few words about his selection. See who he selected here >

Further information about Platform A