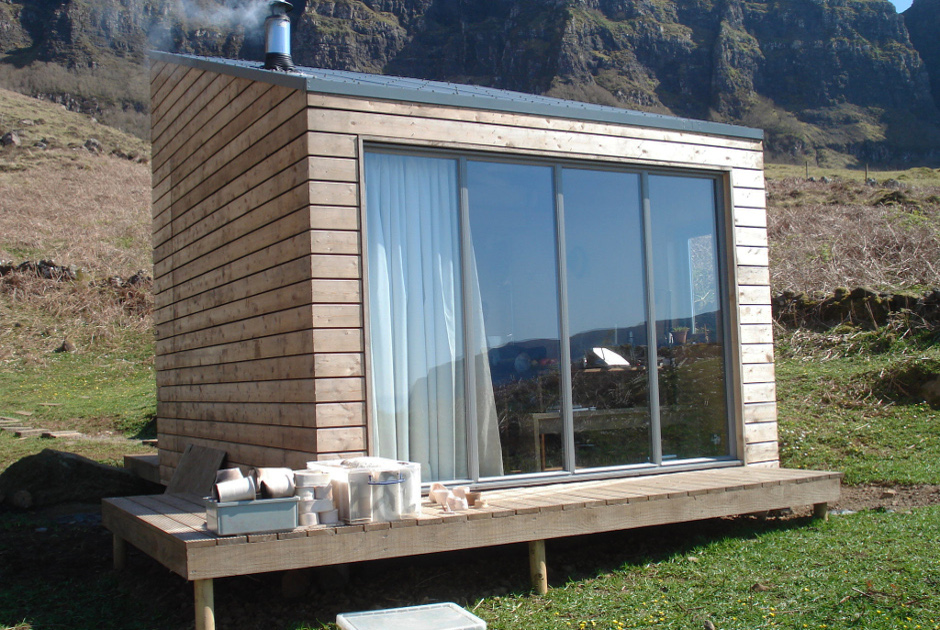 I have to admit it was the romanticism of 'Sweeney's Bothy/Bothan Shuibhne' that seduced me. Set in the wilderness amongst the thorns, I could be dosed in nature and environmental awareness. I could be away from my usual routines. It sounded like a potential retreat; if there was any substance behind the eco-tourist or romantic-consumerist buzzwords, even better. I travelled to the Isle of Eigg in the north east of Scotland, to visit 'Sweeney's Bothy' and find out whether it could live up to the dream.

The Bothy Project is a network of small-scale, off-grid art residency spaces in distinct and diverse locations around Scotland initiated in 2011 by artist Bobby Niven and architect Iain MacLeod. A bothy provides basic accommodation and is usually located in a remote area. Other projects such as Outlandia, the Real Bothy Project and Cape Farewell share similar influences to The Bothy Project, namely land art, environmental activism, experimental architecture and utopianism.

For 'Sweeney's Bothy', Niven asked renowned poet and artist Alec Finlay to take part in designing a bothy. Finlay was inspired by the myth of the 7th century Gaelic King Sweeney (Shuibhne). Cursed by St Ronan to live as a bird on a nest of thorns, Sweeney fled into the wilderness, living naked and foraging for food. Finlay adopted the image of the thorn for the bothy, an idea taken from the book 'At Swim-Two-Birds' by Flann O'Brien (1939), which includes a telling of Sweeney’s myth. 'Sweeney's Bothy' is staged in a clearing once populated by thorns which now line the periphery.

Alec Finlay described his ideas for the bothy in a visual poem using the phrase 'within thorns without shelter'. Finlay has laid out the text in a circle so that it could also read 'without shelter within thorns'. As his poem suggests I did feel sheltered and well catered for when in the bothy. In contrast to Sweeney's original stint in the wilderness, I found myself surrounded by technical innovation such as solar panels and a connection to a localised supply of spring water. There were even textured galvanised fixtures that reflected the glare of the sun from the bothy's exterior.

Eigg itself is like a well-considered technical system based on the interdependence of people and the environment, not in a tie-dyed, tree-hugging way, but in a very real and practical way.

Perhaps this is because of the one hundred residents, many of whom are crofters - living a way of life specific to the Scottish Highlands. Crofting is a unique social system unified through small-scale food production and care for the environment where special attention is paid to the soil science for future generations of crofting use. 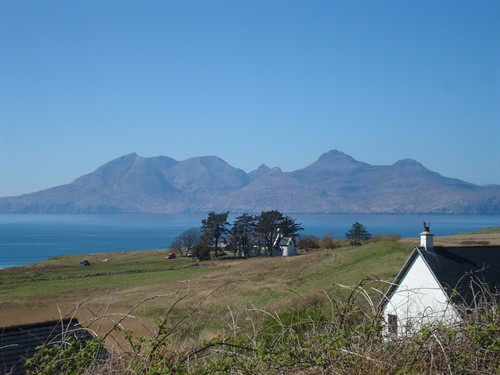 The view of the Isle of Rum. Credit: Sarah Rose

The Isle of Eigg has a culture rich in stories where the inspiration for literature can be traced. The bothy nestles directly under the cliff face of a rock shaped like a giant hand. The view looks out onto the Isle of Rum and is said to have inspired the description of the region Mordor in The Lord of the Rings.

The bothy is home to part of the Walking Library Project by Dee Heddon and Misha Myers. Commissioned by Alec Finlay and The Bothy Project, Myers and Heddon went walking with books selected with the bothy in mind. They were interested in books that provided moments of solitude or companionship to guide you or allow you to get lost.

During another residency, artist Michael Barr read a book from the library called 'Sweeney Astray' which is Seamus Heaney’s version of the Buile Suibhne. Barr then made a film where he re-enacted Heaney's description of Sweeney living naked in a bush.

Hearing about a place called Massacre Cave, I was keen to investigate. A significant site from the conflict between the MacLeod and MacDonald clans, the cave is where 395 island residents were asphixiated by fire in 1577 while hiding from invaders.

London-based violinist Alison Blunt and Glasgow-based installation artist Birthe Jorgensen were at the bothy residency at the time of my visit. While on Eigg, they made an installation inside the cave using beach debris found there.

Placing the found objects upright in the cave, they let them stand for as long as each piece was materially able. They then used these physical durations as a musical score. By animating dead things momentarily through installation and music, they questioned their own nostalgic longing to rid the surrounding environment of debris and return it to a supposedly more raw and natural state. 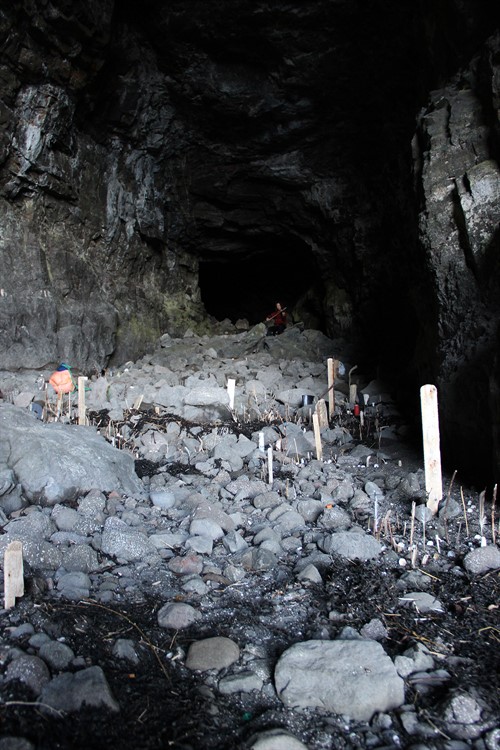 'Sweeney's Bothy' is newly established but those that have visited it have written a series of reflections on the bothy's blog. A common theme is the experience of looking for what was really there and being brought to a different set of realisations than expected.

A residency at 'Sweeney's Bothy' is a place for encounters as well as reflection. It offers its residents entry points into thinking about the past and present. It represents an escape, but also serves as an embodiment of the island's existing ethos, in which residents and their environment are mutually dependent. The most interesting way to experience Eigg is to step out of the shelter of the bothy and get involved by observing the island's working life in all its complexity.

Sarah Rose is writer and artist based in Glasgow. Rose has a Bachelors degree in Writing Studies and Fine Art from the University of Auckland and a Masters degree from the Glasgow School of Art. She is was an Axisweb Writing Scotland participant 2013-4.

Rose is interested in making “work that is inherently collaborative as it is shaped by publishers, designers, artists, and editors.” She often collaborates with other artists and writers and is part of an on-going collaboration called lightreading. For Rose, publishing can many different formats with oral and written outcomes, as well as existing in both public and private domains. She is currently programming ten letters, a series of projects in Glasgow that gives time and attention to writing, reading, and publishing practices outside of the gallery setting.

The Isle of Eigg

Painting (In) The Periphery by Guo-Liang Tan >