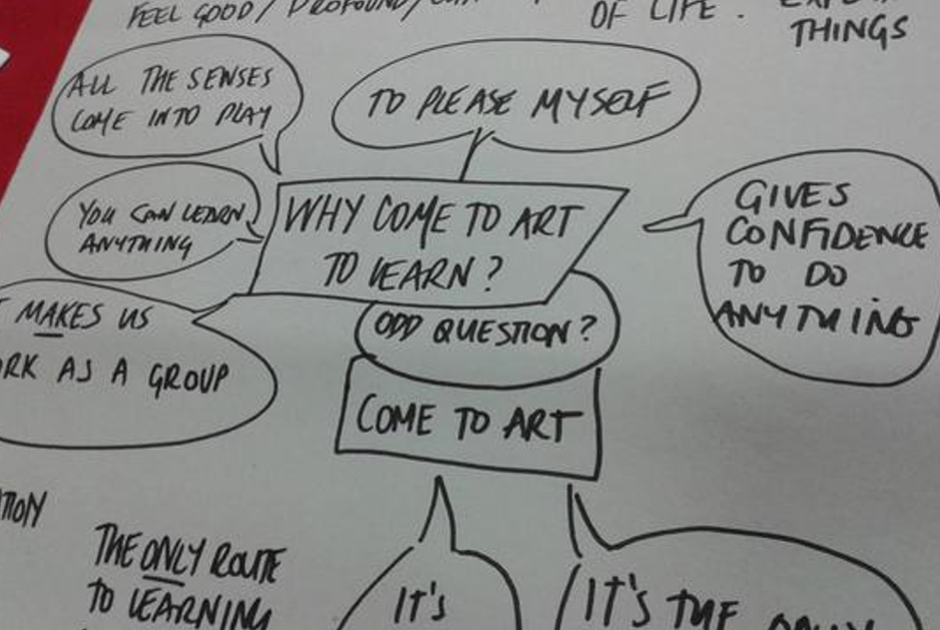 Group discussion during engage International Conference in Leeds this year

This year’s engage international conference focused on the ‘disruptive’ effects of digital technology. We report back from a vigorous discussion

‘Disruptive Influences’ was a good name for this conference.

One way or another, we’re all dealing with disruption in our professional lives, whether it’s changes to the education system, funding pressures or the impact of digital technology on the way we make, present and mediate art.

Is disruption necessarily a bad thing? Can it spark new thinking? Are there even times when we should try to engineer it? And is that where the role of the artist and/or educator comes into play?

True to its title, the conference set out to do things differently, with considerably more audience participation than is the norm at weighty gatherings of like-minded professionals. There was a lot of group work and drawing, and even a moment when we shook off our afternoon torpor with some brisk ballet exercises that took me right back to childhood dance classes. It’s a long time since I’ve executed a ‘port de bras’. But then the conference was based at the HQ of Northern Ballet. 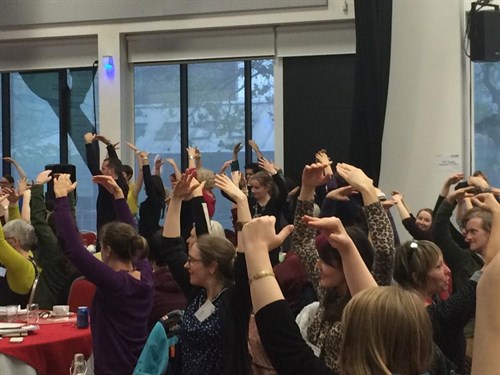 Ballet exercises at the engage conference, which took place at Northern Ballet in Leeds

This annual event brings together gallery educators from all over the country, and further afield, to examine good practice and speculate about what the future might hold. Engage is an organisation that inspires strong grassroots support and offers its members a much-needed forum for exploration and debate. I was struck, as ever, by the thoughtful, quizzical enthusiasm of gallery educators and their lack of ego in an institutional world often dominated by curatorial agendas.

One of the main themes of this year’s event was how the arts are using digital technology to work differently with audiences. I attended a breakout session at which Yorkshire Dance explained how an experimental web platform called respond_ had enabled online audiences to interact with choreographers during the process of making a new piece of work.

I suspect the jury is still out on whether this project has succeeded. It has been harder than expected to recruit audience members not already involved with contemporary dance and the process of gathering online feedback seemed quite laborious to me. But the presenters were at least honest about these challenges and genuinely curious as to whether their prototype could offer anything to other artforms.

Theirs was a well funded project, with a licence to ‘have a go’ and see what happened. One of the things that subsequent discussion never fully bottomed out was the sheer cost and complexity of digital projects. Let’s be frank, the only way to make money out of digital technology is to sell things (Amazon, eBay, Auto Trader et al), monetise your data (but you need a lot of it) or build the platforms that other people use. And most arts organisations are a long way from being able to do any of those things.

Underlying much of the discussion about digital technology there lurked a certain amount of worry - about money, organisational capacity, the speed of change and the ideological implications of sponsorship deals and digital surveillance.

Rob Ashelford from the Digital R&D Fund in Wales was reassuring: no one really ‘gets’ digital, he said. We’re all just playing with it. Rob Greig of the Royal Opera House suggested that websites might not even exist in a few years’ time and tipped virtual reality as the next big thing. For Paula Le Dieu the real impact of digital technology is on our ability to have useful and enjoyable conversation ‘in real time’. But that requires an openness and willingness to let go that can sit uneasily with institutional behaviour.

In the most disruptive and certainly the most barnstorming moment of the day, artist and musician Bill Drummond urged us to ignore the web altogether and instead embrace the ‘here and now’ of intense relationships between one person and another.

Drummond had been an enthusiastic adopter of web technology with projects such as My death and The Open Manifesto. But more recent projects like The 17, a choir that comes into being spontaneously in different places and at different times, proclaim the value of real people, doing real things, in real space and time.

This chimed with a presentation by Helsinki artist Oliver Kochta-Kalleinen about the network of ‘complaints choirs’ he and his partner have established all over the world, which turn our daily litany of minor and major complaints into an opportunity for collective music-making. “Whoever comes are the right people”, he said, reflecting a principle of open-source art-making that owes much to the web. Indeed, the beauty of this project is the way it unites real and virtual to create a sense of community that transcends cultural difference and geography. Wherever we live, after all, our propensity for complaining is much the same. And so, equally, is our capacity for making creative change and converting adversity into something worthwhile.

Find out more about engage

Details of the engage International Conference 2014

Our coverage of the engage International Conference 2014 >

Our coverage of the engage International Conference 2013 >