Home Archive Out and Beyond: Shaun James by Amanda Roderick 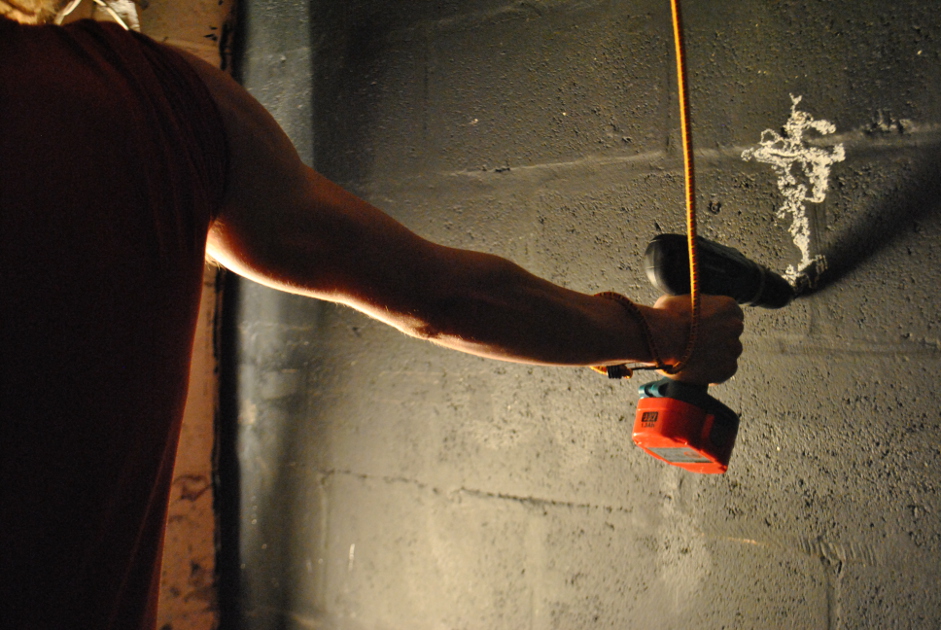 Mission Gallery Director Amanda Roderick writes about the work of Shaun James, whom she mentored as part of our Out and Beyond programme in Wales.

Shaun James’s work is full of playful references to the nature of random chance, problems of uncertainty and probability. He recently referenced Nassim Nicholas Taleb’s book Antifragile as one of his influences and inspirations. The book is an examination of how highly improbable and unpredictable events underlie almost everything in our world. Shaun’s work connects with Taleb’s theory that uncertainty is desirable, even necessary. There is an obvious identification with and connection to the idea that some things not only gain from chaos but need it, in order to survive and flourish.

A film Shaun made on a residency on the Irish coast illustrates this ethos. What he initially set out to do - the creation of an action or graphic artwork involving electrical tape - became a frustrating battle with the elements. The hypnotic, repetitive sound of the wind interacting with his work became part of a final (unfinished) film, whose colour and movement were more mesmerising and celebratory than had originally thought possible or intended.

This sense of play and an openness to the challenges and realities of making work are evidenced in his use of a long list of materials which have all formed components of pieces over time (toy soldiers, electrical tape, elastic bands, hooks, laminated wood, a squeaky dog toy, mount board). Two previous works in recent exhibitions have brought together ordinary, everyday objects in playful, witty, explorations. His performance at tactileBOSCH, which included a power tool and bungee cord, once again demonstrated his use of practical materials. The investigation of crafted elements, such as hand-built frames and tools, has become increasingly important in defining his practice.

Shaun is currently developing new and re-formed sculptural and digital works, which work in tandem with each other. He has engaged with a new set of rules, as his work morphs from printmaking into sculpture. A series of boundaries have been put in place and his intention is for these to instruct, influence and control the random acts that once defined his previous work. 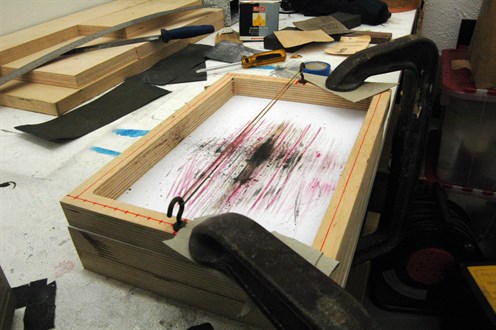 At the very heart, however, lies the same methodology and process as before. Looking back as a postgraduate student, he lists his influences as, ‘Robert Morris, Brian Eno and Hans George Gadamer.’ These choices perfectly illustrate the breadth of his practice then and now as it moves forward. Theoretical and philosophical writings on play, process, movement and repetition continue to inform his practice.

Whereas he would perhaps in the past have declared himself ‘immune’ to prescription, prediction, errors and adverse external events, he now tries to contain or control them in self-titled ’semi-instructional video artworks.‘ The aim is to contextualise a process in which an individual responds to some external apparatus in order to make a mark or artwork of some description.

Shaun is currently showing his new work, for the first time, in Mission Gallery’s the […] space. This is a programme for moving image and artists' film and an opportunity for artists to profile or re-contextualise work which is currently in development. The exhibition and production process will be staggered, so that a different film and object will be be installed over the four weeks.

Shaun’s wish is to merge the two strands of practice and deliver a ‘complete picture'. He continues to reaffirm his sensibilities - his desire to both exploit and explore “process and product; perception and interpretation and in particular the role that the artist plays in the creation or production of an artwork”.

Amanda Roderick is the Director of Mission Gallery in Swansea. After training as an artist, she returned to Wales to volunteer at the then Swansea Arts Workshop Gallery. She has had experience in various roles at Mission Gallery and following several years as its Gallery Development Officer, became its Director in 2011. Amanda is also on the Board of the Jane Phillips Award, administered by Mission Gallery. The bi-annual award seeks to supports emerging artists' development through residency, mentoring and a bursary.