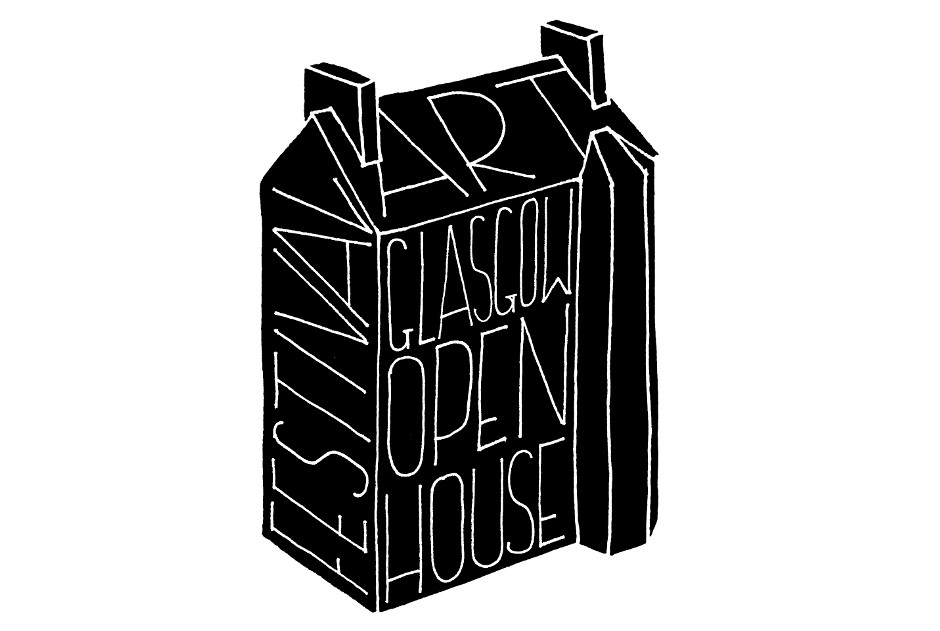 One exhibition held in the front room of a flat in the heart of Glasgow might not merit much attention, but the simultaneous launch of over 40 exhibitions and events in Glasgow’s tenements and lesser-known regions is another matter. This is all thanks to the vision and sheer determination of a handful of Glasgow School of Art graduates led by Glasgow Open House Art Festival founder, Amalie Silvani-Jones. I invited Amalie and one of the festival’s project coordinators, Phoebe Barnicoat, round to my own tenement flat for a cup of tea to talk about Glasgow’s innovative new visual arts festival. 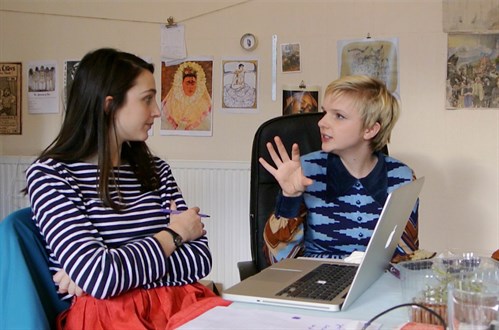 Laura Campbell: By way of getting the ball rolling, can you tell us what Glasgow Open House Art Festival is?

Amalie Silvani-Jones: It is a ten-day festival hosted in mainly domestic spaces and some outdoors spaces featuring the work of 82 artists over 33 venues. There will be 23 exhibitions and 23 events in total.

LC: The festival is running parallel with Glasgow International – was this a tactical decision?

Phoebe Barnicoat: I think for the first year [of Open House Festival] it makes sense because everyone is talking about art and is in that kind of mindset.
ASJ: I guess we wanted to join in. It’s a big year for Glasgow with the Commonwealth Games and there are a lot of cultural things happening. We wanted to be a part of that. 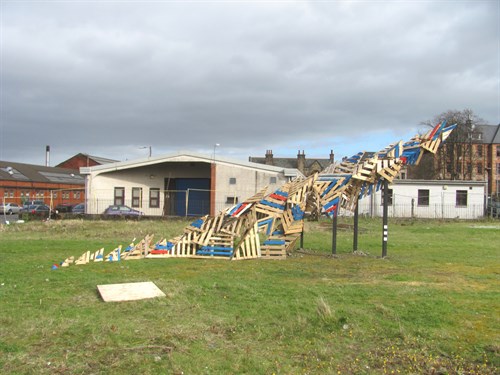 The Release by Altronix at STREETLAND. Photo courtesy of Glasgow Open House Festival.

LC: The festival will be hosted predominantly in flats. Will the festival take place in other unconventional spaces?

PB: We’ve got STREETLAND taking over a disused wasteland on Victoria Road in Govanhill and they’re going to be converting this space – this weedy patch of grass – into a sculpture park. And then we’ve got the CAVEROOM …
ASJ: CAVEROOM is a good one. It’s an industrial tunnel built around the turn of the century that’s going to be converted into an exhibition space.
PB: We’ve also got artists doing an exhibition in a van: Catherine Hotchkiss and William Aikman. It’s going to move from location to location and will be traceable via a website . People can track it down and get inside; it’s going to be an immersive experience.

LC: Do you think the general public will attend the festival?

ASJ: I bloody hope so. I mean we’re completely in the dark about what will actually happen during the festival. It’s been designed to be approachable to people who aren’t within that tight-knit circle. I think people will be interested to see the artist’s living space. Some people might be uncomfortable entering someone else’s home, but hopefully the artists will be open and inviting. We’re trying to encourage them to put up balloons. 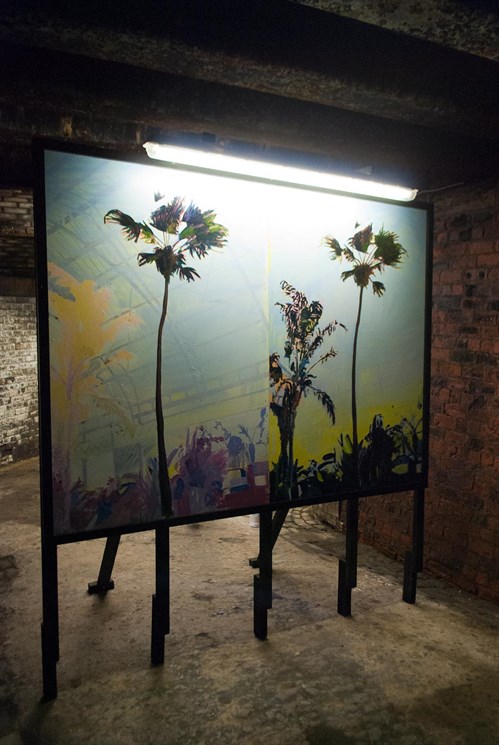 LC:Do you feel Open House Festival is following in the footsteps of other ‘DIY’ initiatives that have taken place in Glasgow over the last few decades?

PB: I think it’s ingrained in the mindset of all artists in the city. It’s that idea of ‘If you want to do it, just do it!’ It’s no big deal; it’s nothing new putting on shows in the house.
ASJ: There are loads of exhibitions in flats, but I think this is really different because there’s more than one. If you have one exhibition in a flat, it’s really exclusive and obviously there are size limitations about how many people you can actually get inside. Once you have loads of flats, people are actually touring so it’s a different thing altogether.
PB: I think it will be more people passing through rather than stagnating. There will be a small amount of people there at one time, which will be nice, and more of an intimacy with the work.
ASJ: I guess that’s one of our main things, wanting to create an atmosphere that’s more conducive to people actually communicating with the work. There are barriers in galleries and things that personally make me feel disconnected.

LC: Both of you will be showing some of your own artwork in the festival. Tell me a little about that.

ASJ: I’m doing an exhibition in the spare room of my flat and my dad's doing an exhibition in the lounge. Working and exhibiting in the same space has really inspired me to move towards a more 'installation'-based practice, taking into account the architectural features of the space. It's been a freeing experience for me, I can literally do what I want and not have to worry about how it'll translate in another environment.
PB: I’m doing an exhibition, a felt-tip drawing exhibition, with two artists that attend Project Ability in the city. I’ve been volunteering there and met these two boys Peter and Euan, who both absolutely love drawing. I was already making my own work when I invited them to draw with me. Our work is actually going to be exhibited in a flat that someone kindly donated to the festival. It’s a fantastic opportunity for Peter and Euan to show their work in a contemporary art context for the first time. 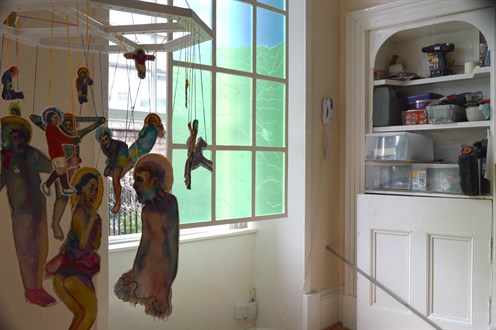 LC: With Glasgow Open House Art Festival are you aiming to create a level playing field for artists across the city? You have established artists showing alongside art school graduates for example.

ASJ: Which we had no idea about – we had no idea that established artists would apply for this. It was quite a shock to us really, wasn’t it? Sara Barker was the first to apply - she’s represented by Mary Mary . There’s also Douglas Morland, David Sherry, who’s showing with STREETLAND, Dan Hayes, Torsten Lauschmann and Paul Housley.

PB: Annually.
ASJ: Next year we will be standing alone from other cultural events [such as Glasgow International] so it will be really interesting to see how that goes.
PB: It’ll be the perfect platform for people just graduating. For instance I wouldn’t be doing anything this year if I didn’t have this. Loads of other people in the festival have said the same – it’s something to work towards, the next step…
ASJ: Everyone was kind of in a lull when I started it. I was thinking, ‘What’s everyone doing? We’re just showing to our friends.’
PB: It gets to the point when you’re thinking, ‘We should just do something ourselves.’
ASJ: Come on! Let’s do something proper!

Laura Campbell graduated with a BA in Painting and Printmaking in 2013 from Glasgow School of Art. Campbell sees the parallels between visual art and writing: “Teasing ideas out of paint is not so different from teasing ideas out of words; both are malleable and can be tweaked, altered and erased to just the right effect.” Whilst studying Campbell created a monthly art school zine, so as to have a platform for her writing and voice opinions on cultural events taking place in Scotland.

Looking to remember: A literary exploration of the work of Sara Barker by Ciara Healy