In the second of our art prize specials Chris Sharratt heads north to talk to John Moores prizewinner, Narbi Price, about his painterly journey into the mundane and the macabre.

“I hadn’t picked up a brush for two years before I did my MA,” says Narbi Price, smiling broadly as he recalls a period when the last thing he wanted to do was actually paint.

“I was working full-time in an art shop, running a record label and putting on bands in Newcastle with a friend. Then I had one of those sleepless nights when I thought, ‘What am I doing. I need to get back into it’; I needed to paint again.”

At the time, Price didn’t even have a studio, such was his disconnection from the process of painting. Five years on from that late night reappraisal, he’s ensconced in a 1960s city centre office block, recently converted into artist-friendly units.

There are canvases leaning against each other in one corner of his compact workspace; paintings on the walls in various stages of completion; a bookcase groaning with interesting juxtapositions (The Art of Bill Viola next to The Tommy Cooper Joke Book; The Shock of the New rubbing shoulders with a book on the making of Kick-Ass). 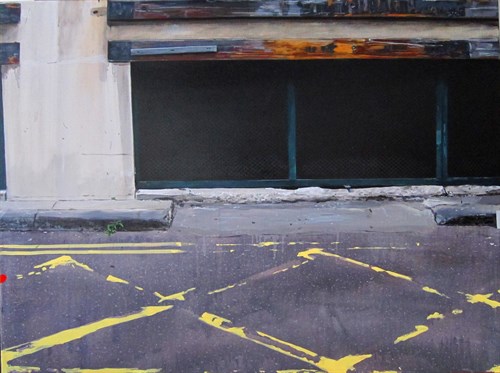 “To be in that five, out of around 3000 who applied, is just like a legitimisation of what I’m doing in the studio,” says Price. “Being a painter is a very solitary pursuit, and so it’s like being told that this thing I’m doing isn’t that bad after all.”

While not a John Moores veteran – he’s only 32 – this isn’t the first time the Hartlepool-born painter has been in the show. ‘Untitled See Saw Painting’, produced while he was doing his MA at Newcastle University, made it into the 2010 exhibition, and it’s because of this that he now has representation in Italy; a Milan-based gallerist saw the work and offered him a show.

That was his first attempt at navigating the John Moores’ application process, which remains anonymous at all stages.

His relationship with the prize, though, goes back much further. He is, it’s fair to say, a bit of a fan, and if proof were needed his bookcase offers it – neatly arranged in date order are six John Moores’ catalogues from 1999 to 2010.

“Being a prizewinner this year feels bizarrely cyclical,” he explains, “because two of the judges – Angela De La Cruz and George Shaw – were both prizewinners the first year I saw the show in 1999.”

The presence of the 2011 Turner Prize nominee on the judging panel seems relevant – superficially, you could say there’s something a bit George Shaw about Price’s work.

Look more closely at his scenes of everyday blandness, of the unremarkable made beguiling, and both in terms of the painterly qualities and the relationship to place, they stand apart from Shaw’s work.

Price explains: “I’m interested in the idea that history is there with us all the time, it’s embedded everywhere, you can’t escape it. It’s kind of like drawing itself – these marks and traces have been made by something and there’s always some kind of story.”

Price has, he says, employed different strategies over the years in pursuit of extracting profundity and meaning from run-of-the-mill places. There was a time when he did things Boyle Family-style, taking photos quite randomly as he searched for his subject matter.

While it was doing this that led to ‘Untitled See Saw Painting’, his prizewinning 2012 painting was the product of a very different approach. 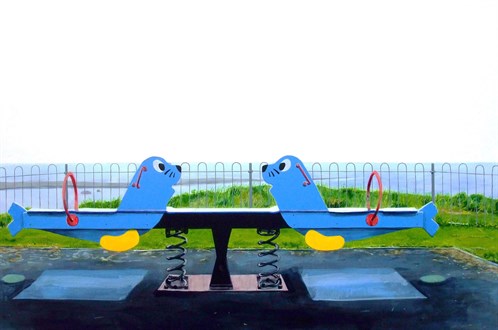 “I think the danger of making a figurative painting is that they can become too illustrative: ‘This is a painting of that - the end’,” he says. “I was wanting to find a way to suggest that there might be more going on here.”

Price’s solution was to replace randomness with research. Rather than the visual language of a place shaping his decision to paint it, he would instead be guided by the hidden stories of a scrap of land, a building, a pavement, or a loading bay. “Our reading of images and spaces changes with our knowledge of their history,” he says.

‘Untitled Kerbstone Painting (MJK)’, then, is exactly that but also something else. It forms part of a series of five paintings of the scenes of the 1888 Whitechapel murders – more commonly known as the Jack The Ripper murders. The only clue to this narrative is the bracketed initials of the victims in the title – in this case, they stand for Mary Jane Kelly.

It’s hard not to feel a little uneasy on discovering the process that led to the painting, and Price is aware of the potential for ghoulish interpretations. He insists, though, that the choice of these particular central London locations – which having researched he visited and photographed – is not about a fascination with the murders themselves. It’s the now, rather than then, that he’s most interested in.

“They were absolutely horrific, terrible crimes, but now they are also this kind of shorthand for a particular, archetypal Victorian cliché. And I suppose I’m trying to get close to this idea that it’s happened, it’s gone and it’s as if it was never there.”

There is, of course, a very painterly link to these infamous and unsolved murders, through the work of Walter Sickert – the novelist Patricia Cornwell has even argued that Sickert was in fact the murderer. Price, along with most people, is dismissive of the theory.

He’s also a fan of the Victorian painter: “I like his work. There’s a brevity to it and in a way his paintings are a bit ugly. There’s a kind of real, scrubby way that he puts on paint.”

Price, too, tries to capture a certain grubbiness, an imperfection in his paintings. “It’s about challenging how you expect a photo-derived painting to look,” he says. “In terms of how I put paint on, I’m interested in the way that I can make something that seems reasonably photographic from six or eight feet away – a kind of shorthand for a photographic representation.”

Get up close, though, and Price’s paintings reveal the messy, unpredictable, even chaotic relationship between paint and painter. “I suppose,” he says, “I’m trying to have the paint disrupt the looking.”