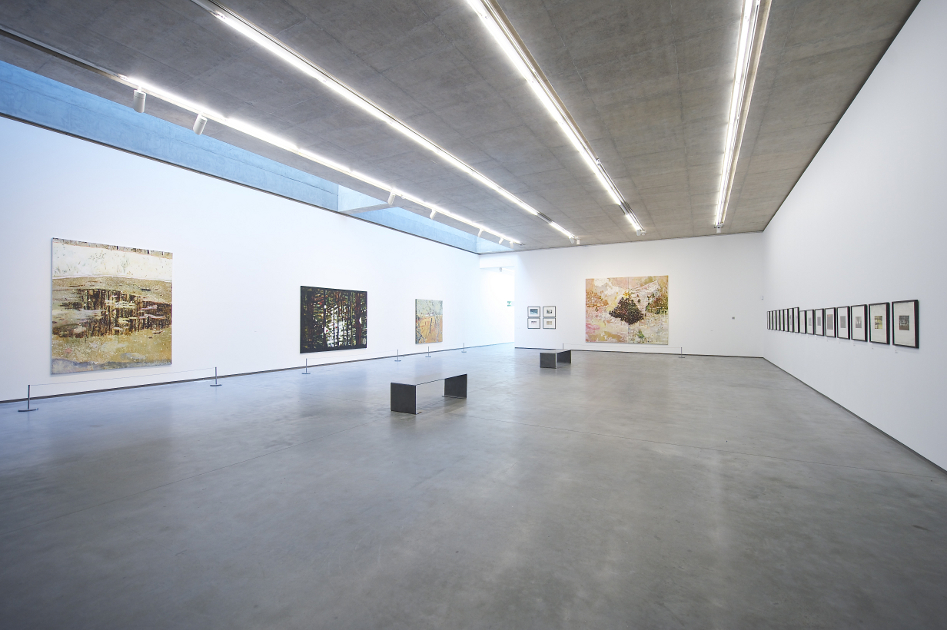 Declan Long takes a look at some of Belfast’s exhibition highlights from 2013.

During 2013, the city sometimes called Derry or Londonderry, or Derry/Londonderry, - or even, as a Twitter hashtag names it, ‘Legenderry’ - has been enjoying well-earned attention as the UK City of Culture. Visual arts programming in Derry for 2013 has been varied, confident and ambitious - maintaining interest in close-to-home concerns while also emphasising an international outlook. Two undoubted highlights have been the landmark retrospective of work by internationally acclaimed Derry native Willie Doherty and, of course, the Turner Prize exhibition, which has chosen Derry for its first city-break outside of England.

To some extent, these standout Derry shows together have relevance to art’s wider predicament in Northern Ireland - in a way that inevitably resonates with ongoing anxieties and opportunities in Belfast. Willie Doherty’s art compels concentration on the lasting, traumatic impact of the thirty-year Troubles. The Turner Prize, newly arrived in this context, celebrates fresh developments in contemporary art. Essential markers of the past therefore take their necessary place alongside speculative signposts to the future. Granted, this is a combination of cultural priorities that might be evident anywhere, but in Derry and Belfast, for reasons not hard to fathom, art often comes with heightened self-consciousness about how past events place pressure on the conditions of the present.

In Belfast such ‘pressure’ is often forcefully evident, but points of departure from the constraining past are also visible. Two exhibitions from 2013 suggest aspects of this duality, pointing usefully to the various priorities of art organisations in the city, the relevant institutions in this instance being the highly-regarded photography gallery and commissioning agency Belfast Exposed, the recently opened Metropolitan Arts Centre (MAC), and two important artist-led spaces: the Golden Thread Gallery and Catalyst Arts. 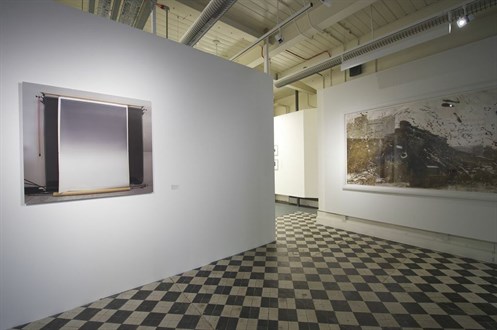 The first of these exhibitions, Northern Ireland: 30 Years of Photography, was collaboratively staged earlier this year between the MAC and Belfast Exposed, but centring on the history of the latter institution. It was an involving exploration of photography’s heterogeneous responses to the changing - and sometimes depressingly unchanging - circumstances in Northern Ireland, featuring profoundly influential Northern Irish artists such as Doherty, Paul Seawright and Victor Sloan, plus a large number of other inventive and insightful practitioners (including John Duncan, Daniel Jewesbury and Hannah Starkey).

The show rightly highlighted the tremendous thirty-year achievement of Belfast Exposed. But it also marked an interesting moment for the project’s partner institution, the not-long-opened MAC- an architecturally bold, top-of-the-range new venue that has rapidly become central to Belfast’s overall visual arts ‘offer’.   The programme at the MAC is curated by the well-respected figure of Hugh Mulholland (former director of the Ormeau Baths Gallery, once the key contemporary art venue in Belfast) who has taken on the inevitable challenge of developing a programme that can, like Belfast Exposed, connect with real concerns in the city, while also initiating new kinds of external conversation. The first year of the MAC programme - which has also included impressive solo presentations by Belfast-based photographer Mary McIntyre and Swedish video artist Johanna Billing along with occasional shows by mega-artists such as Peter Doig and Andy Warhol- suggests that such dialogues are certainly possible.

The second exhibition exemplifying some enduring energies and interests of the Belfast art scene is the latest episode in the Golden Thread Gallery’s multi-part series Collective Histories of Northern Irish Art. Under the direction of artist Peter Richards, the Golden Thread has steadily staked out valuable independent space as a public gallery. In addition to consistently promoting rising talent in Belfast - and we might name here such recently featured artists as Gerard Carson, Mary Morgan, Ciaran Ó Dochartaigh and Ryan Moffat - the gallery has now commissioned ten of its open-ended series of reflections on the art of Northern Ireland over recent decades. Each is curated by an invited representative of specific aspects of the visual art world and each proposes a distinctly inflected account of Northern Irish art practice. 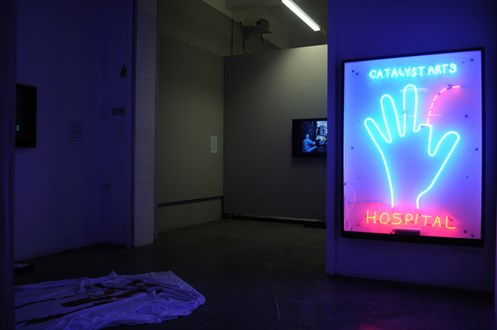 On this occasion, Cherie Driver is the guest curator, and the chosen focus is the artists-run space Catalyst Arts - an independent artists’ initiative that has been a vital, agitating presence in the Belfast art world for two decades. At different stages, Catalyst has been a creative ‘home’ for most, if not all, of the critically-acclaimed artists to have built careers in Belfast over the past two decades (among them two Turner Prize-related figures: Phil Collins, shortlisted in 2006, and Susan Philipsz, winner in 2010). This retrospective study of the Catalyst legacy gathers relics associated with many still-essential artists in Belfast: Susan MacWilliam, Dougal McKenzie, Dan Shipsides and Theo Sims, for instance.  Alongside other more ardently present-tense or future-focused art on show in Northern Ireland this autumn, the Catalyst Arts Collective History will offer a crucial insight into how Belfast developed the kind of arts scene it has today.

What the Catalyst Arts show may also allowed for reflection on are things that have been either lost or gained on the way to where we are now.  If Catalyst Arts, especially in its early years, represented a need to create cultural space in an otherwise conservative art context, it is worth wondering what drives the ambitions of new generations of artists. Other projects, of course, suggest that there is still a strong space-making spirit in the city. The PS2 Gallery, instance, affords artists room for a modest testing out of art ideas; the Household curatorial project encourages artists to consider ways to site art in domestic spaces; the Prime Collective seeks to stimulate new forms of collaboration. One other project merits a concluding mention: The Forum for an Alternative Belfast is an independent architectural think-tank that frequently intersects with art world activities. Like much of the best of what goes on in Belfast, it stays close to conditions on the ground, while imagining entirely new ways to move on from the present reality.

Lecturer and course Director at the National College of Art & Design in Dublin and member of the 2013 Judging panel for the Turner Prize. Declan also writes reviews for Artforum Magazine, Source Photography and Arena on RTE Radio 1.

Contemporary art in Derry/Londonderry - An Overview by Sheila McGregor