Home Archive The Sound of Manifesta 9: The Deep of the Modern

The Sound of Manifesta 9: The Deep of the Modern 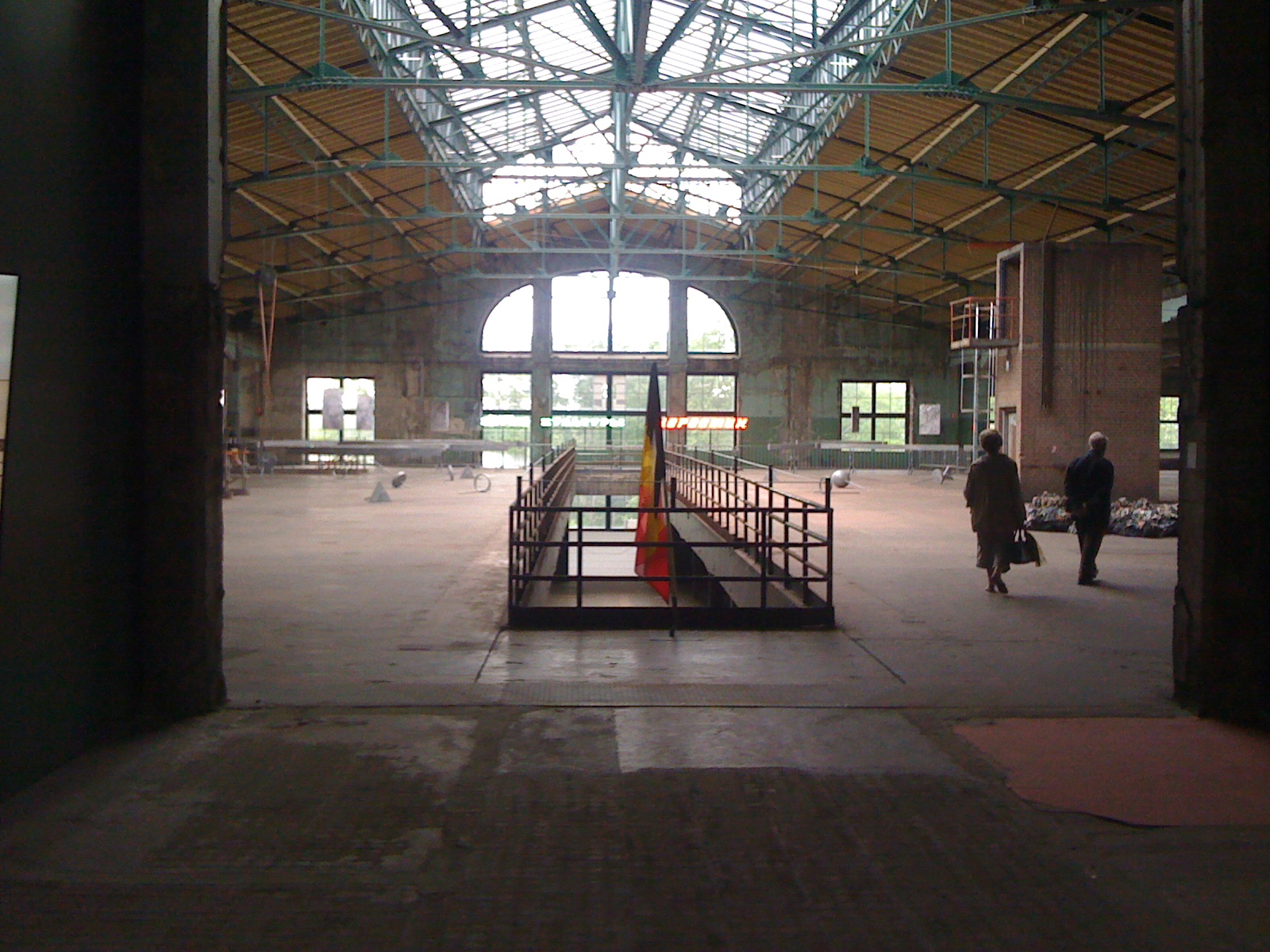 Inside the Waterschei mine complex in Genk

Lesley Guy reports on Manifesta 9 in Belgium's coal-mining heartlands and finds in the event's sound-based work a powerful evocation of the area's industrial past.

The 9th Manifesta Biennial is currently taking place at the restored Waterschei mine complex in Genk, Belgium. The title, The Deep of the Modern, reflects the scale of the project, which is ambitious.

Cuauhtémoc Medina and his Associate Curators, Katerina Gregos and Dawn Ades, have sought ways to explore how a contemporary art festival might engage with the past through art history as well as with the industrial (i.e. coal-mining) heritage of the area.

I came away from the opening weekend feeling that, despite the event being a little too obsessed with coal, the curators had managed to put something together that could capture the interest and the imagination of a wide audience - an important thing for a region that has no art scene to speak of.

The Waterschei building with the giant 9 figure

On arrival I was struck by the visual effect of the giant figure 9, designed to incorporate the shape of the impressively large window, on the side of the administrative building that houses the biennial.

Indeed there is much to see that is provocative and exciting. More subtle, and slow-burning, however, are the sounds of Manifesta 9, and their effect has been longer lasting.

Drifting through the air was tinkling music that sounded like an ice-cream van. The tune was familiar: was it the Marseillaise, Lara’s theme? I couldn’t figure out what it was. It got stuck in my head and I was humming it even when it wasn’t playing, for it would play intermittently. What I was hearing was Monument to the Memory of the Idea of the Internationale, 2010, by Nemanja Cvijanovic. 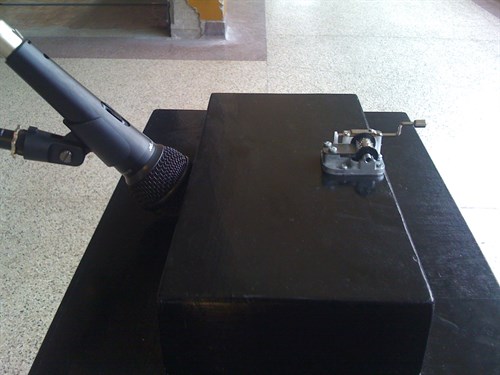 Nemanja Cvijanovic, Monument to the Memory of the Idea of the Internationale, 2010

The Internationale, a nineteenth century call for solidarity and resistance, is a song well known amongst those involved with left-wing activism. Cvijanovic has made the source of the music the tiny barrel of a music box that can be hand-turned by visitors.

The tune is amplified via a number of microphones and speakers, building up the volume, to a set of massive speakers outside the venue which are stacked to create a pyramid of sound.

It never gets to the chorus, which I assume must be deliberate, for it creates a feeling somewhere between frustration and hopeful expectation (which I suppose reflects my experience of the socialist promise), thus encouraging me to finish the piece myself.

Off one of the main rooms and down a lonely tunnel-like corridor is Martinete, 2011-2012, by Oswaldo Maciá. Flamenco rhythms, beaten out using hammer and anvil, echo down the atmospheric, mouldy tunnel, getting louder and more threatening as it progresses. 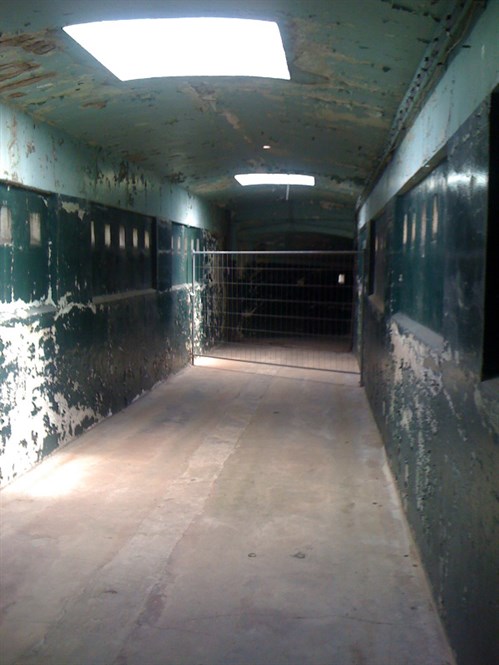 Towards the bottom, a barrier of industrial, metal fencing bars the way, preventing the discovery of the sound's source. On top of this is an odour, described by the artist as the smell of failure (it smelled like an aftershave popular in the 1980s). This, combined with the pre-existing mould dripping down the walls, made it a multi-sensory experience which was familiar but perturbing, reminding me of Andrei Tarkovsy’s Stalker.

Sounds from Beneath, 2010-2011, by Mikhail Karikis and Uriel Orlow, is a film clearly influenced by the artists’ background in theatre. They worked with miners in Kent, using their voices to recreate the sounds of the mining industry. From this they have made a sweeping, musical sound-scape to accompany the choreographed images of miners gathered on a windswept beach. The work is a testament to the quality of sound and the way it can open up the viewer/listener to an emotional, aesthetic response. Many of those I saw leaving the film had tears in their eyes. 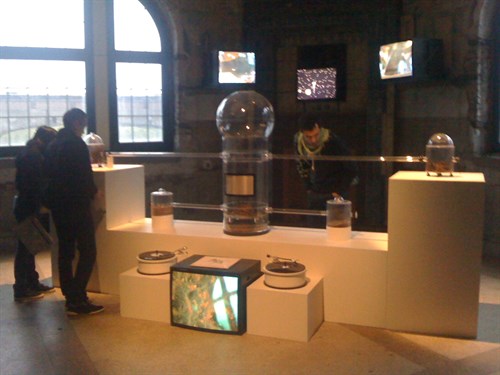 Fascinating, though less successful, was the installation Oh!m1gas, 2011, by Kuai Shen. Cameras and contact mics placed inside an ant farm send the sounds of insect industry to a turntable device that ingrains them into a vinyl record. Ultimately, the ants themselves were more interesting than the work made from them. However, saying that, the process of recording their actions translated into a bizarre alien experience.

Similarly, I enjoyed sitting in Goldin+Senneby’s darkened room listening to The Decapitation of Money, 2010, but I was left wanting more. The audio version of a guided tour exploring the secret society 'Acéphale', associated with Georges Bataille, could have taken me much further into this world.

I was delighted to stumble across Searching for Parrots, which was developed as part of the Manifesta education project. It is a downloadable sound walk, and as a guide it is a strange and wonderful experience. The friendly voice of local resident Rudy leads you around the surrounding area, pointing out little details and illustrating them with anecdotes. 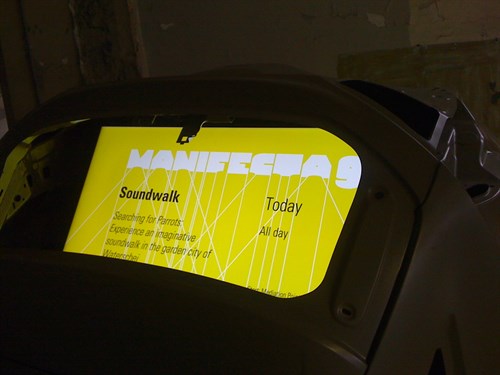 The audio guide, Searching for Parrots, part of the Education and Mediation of Manifesta 9

Like the real guided bus tour I took that weekend called Subjective Bus Line (part of the parallel events programme), using real people to provide an aural history is an excellent way to tie the pieces of an event like this together. It helps put things into context and puts a human face or voice to the project.

Curating a number of sound works or any works with sound together in one show is never a simple task. The range of spaces at Waterschei and smart management seems to have allowed the sounds to exist throughout the exhibitions without interfering too much
with each other.

What is more impressive is the way that these works get straight to the heart of the matter, expressing the curatorial premise with richness and pathos. This show does not shy away from being emotional for how else can we engage with the past if not through our feelings? These works are the voice of Medina and his associates' vision, which, at its best, is deep and resonating.

Lesley is an artist, writer and curator based in Sheffield. She is also a Content Curator at Axisweb.