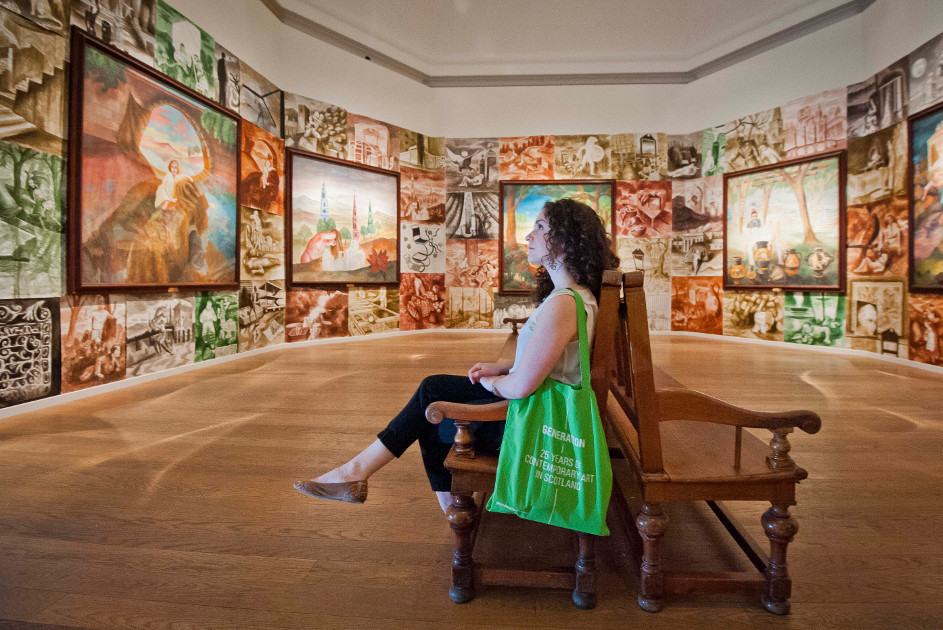 This summer, a few miles outside of Stromness in Orkney, I stooped my head and clambered into the low stone-clad corridor that leads to a high-ceilinged chambered cairn tomb known as Maeshowe. Maeshowe is more than 5,000 years old. It was “discovered” in 1153 by a group of Viking warriors lost in a snowstorm. They took shelter there for a few nights and left behind runic graffiti, some of which is a bit too rude for recitation on the public tours.

All of Maeshowe is now ancient history, but it’s the more recent bit that fascinates me. The Vikings seem so near, yet they are so far away. The intimacy of their rude jokes disguises the fact that they were very different from ourselves. When we look at the Maeshowe graffiti, against the vast mysteriousness of the Neolithic tomb it is scratched into, we see the commonality not the difference. It’s much harder to see recent history as history itself.

When GENERATION: 25 Years of Contemporary Art in Scotland, a nationwide historical survey, opened this summer, involving more than 100 artists across 60 venues from Orkney to the Borders, I had similar feelings. The word contemporary suggests a snapshot of now, but 25 years is a long time ago. Might we tell the difference? Could we understand the recent past in the historic sense? 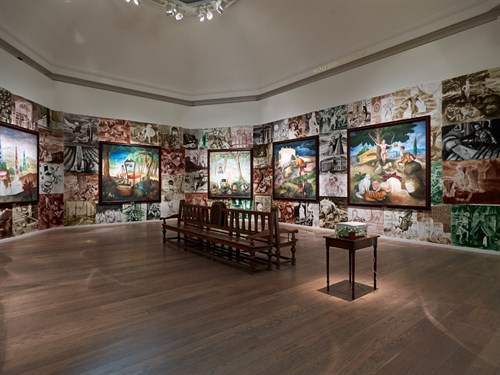 At the Scottish National Gallery I found myself with a group of artists sitting on the wooden benches borrowed from Kelvingrove Museum, a careful recreation of On Form and Fiction, an exhibition by the late painter Steven Campbell that took place at The Third Eye Centre Glasgow in 1990.

An absolute triumph, the NGS re-presentation brings out paintings and watercolour drawings that had languished in a gallery basement for two decades and it feels vital and new. Looking at Steven Campbell’s work afresh was to discover some curious things about him, an artist I thought I knew well. There was his interest in modernist buildings of Glasgow, which tied him to the work of artists like Martin Boyce and Toby Paterson.

And there was the eerie similarity of some of his more fantastic drawings with the drawings and sculpture that delineate the invented universe of Charles Avery, on show at the Scottish National Gallery of Modern Art (SNGMA). It turned out that Avery had never seen the work (I checked!). None of these lineages could be denied. Campbell was an older artist who had created On Form and Fiction as he struggled to define himself in a changing scene on his return from triumphant years of new expressionism in New York.

As a group of us talked, the admiration for Campbell and for this beautiful recreation of his work did not disguise the schisms and difference between Campbell and subsequent generations of artists. On Form and Fiction was history not contemporary. 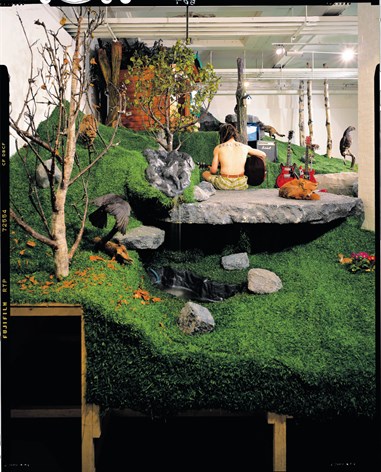 GENERATION is a unique project: in scale and ambition there has been nothing like it in any other nation. But the problem of history is universal. If the programme sought to balance then and now, between existing works and new commissions, it is the gap between them that has been incredibly moving.

At the SNGMA Ross Sinclair’s 'Real Life Rocky Mountain' is a slice of AstroTurf and fibreglass hillside from 1996 that affectionately parodies Scottish mythologies. In performance the sight of the artist as he is now, with shaved head and thickening waist, singing Teenage Fanclub’s gentle anthem 'Everything Flows', set against the video footage of Sinclair as a younger, tauter man with flowing locks, was acute and touching.

The danger in the shows - some were curated by the National Galleries of Scotland and some by Glasgow Life for its venues GoMA and Tramway, others by autonomous organisations across the country - was that they represented the triumphalism of a forty-something generation of artists, those like Douglas Gordon, Richard Wright and Martin Boyce who have notched up their Turner prizes and their international careers, at the expense of the more marginal or less-established. 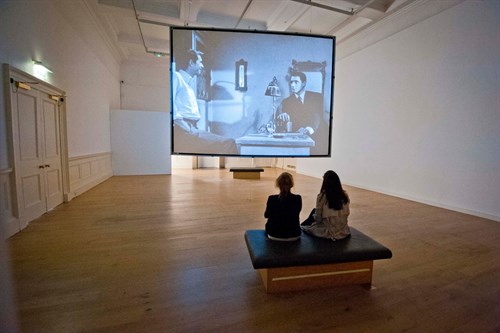 It has nevertheless been salutary to understand that for non-specialist audiences these artists are not household names. In Kirkcaldy, for example, I met a group of students who had never entered an artist's studio, but where the education programme had meant that they had interviewed the artist Toby Paterson.

That simple access had entirely changed their understanding of their own future. The risks were also offset by newer works: a striking performance by Charlotte Prodger at Tramway, for example, the lush slightly sinister presentation of members of Glasgow Sculpture Studios curated by an outsider, the Swiss-based poet and curator Quinn Latimer.

A further risk for the project was that in referendum year it would run aground on definitions of Scottishness, in the way that the exhibition The Vigorous Imagination had sought to define characteristics of Scottish Art in the eighties. In the end, GENERATION studiously avoided such arguments, emphasising the international community of artists over any nationality test and artefacts over ideologies. 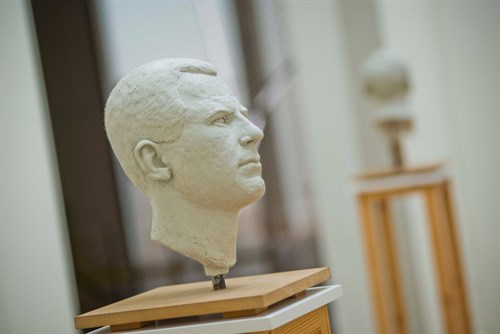 Unlike its predecessor GENERATION placed woman artists at the centre of things, including Karla Black, Lucy Skaer, Kate Davis and Claire Barclay in a beautiful yet ferocious installation of wood, weavings and textiles that seemed like a dirty protest against more clinical presentations. L’Homme Double , the tough installation by Christine Borland from 1997 that deals with the image of Joseph Mengele, remains robust to this day.

That was not to say that a sense of place did not exist, however. Ilana Halperin performed at Fingal’s Cave. In Orkney, in an excellent mini-retrospective, Walker & Bromwich drew meaningful political lessons from various sites. I couldn’t make it to Joanne Tatham and Tom O’Sullivan’s Hebridean project with Atlas Arts. But it’s title 'Are You Locationalized?' and its targets, among them an exploration of publicly-sited sculpture, suggest astute and well-judged examinations of place. 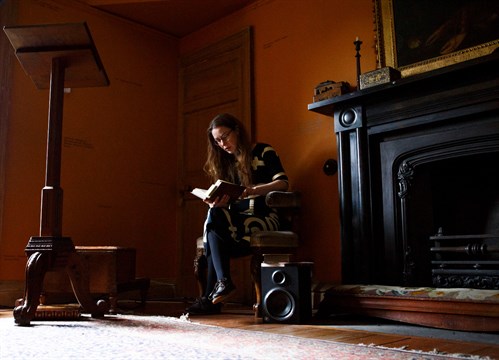 In Fiona Jardine’s superb, spoken-word work 'Let The Day Perish', at Hosptialfield House in Angus, a recorded performance by the richly-voiced Andy Pelc of Jardine’s text consisted of redolent words referring to colours and textures drawn from the oeuvre of novelist Lewis Grassic Gibbon. It placed a deep emphasis on the environment and locale without ever getting mixed up in creepy nationalist rhetoric.

In one section of the piece, Jardine read an extract from George Mackay Brown’s novel Greenvoe, that deals with the secret cult of the Horseman’s Word, a kind of rural masonic order popular with ploughmen and farm labourers in North East Scotland in the 18th and 19th centuries.

For Mackay Brown, history was multi-layered and ever present, this tradition was the living pulse of history at risk of extinction from industrial development. He was writing about Orkney so he would surely know how complicated all that history stuff might be.

For information about the GENERATION project visit generationartscotland.org

Moira Jeffrey is a writer based in Glasgow. She was not involved in the curatorial side of GENERATION, but edited the publications for the project The GENERATION Guide and The GENERATION reader.