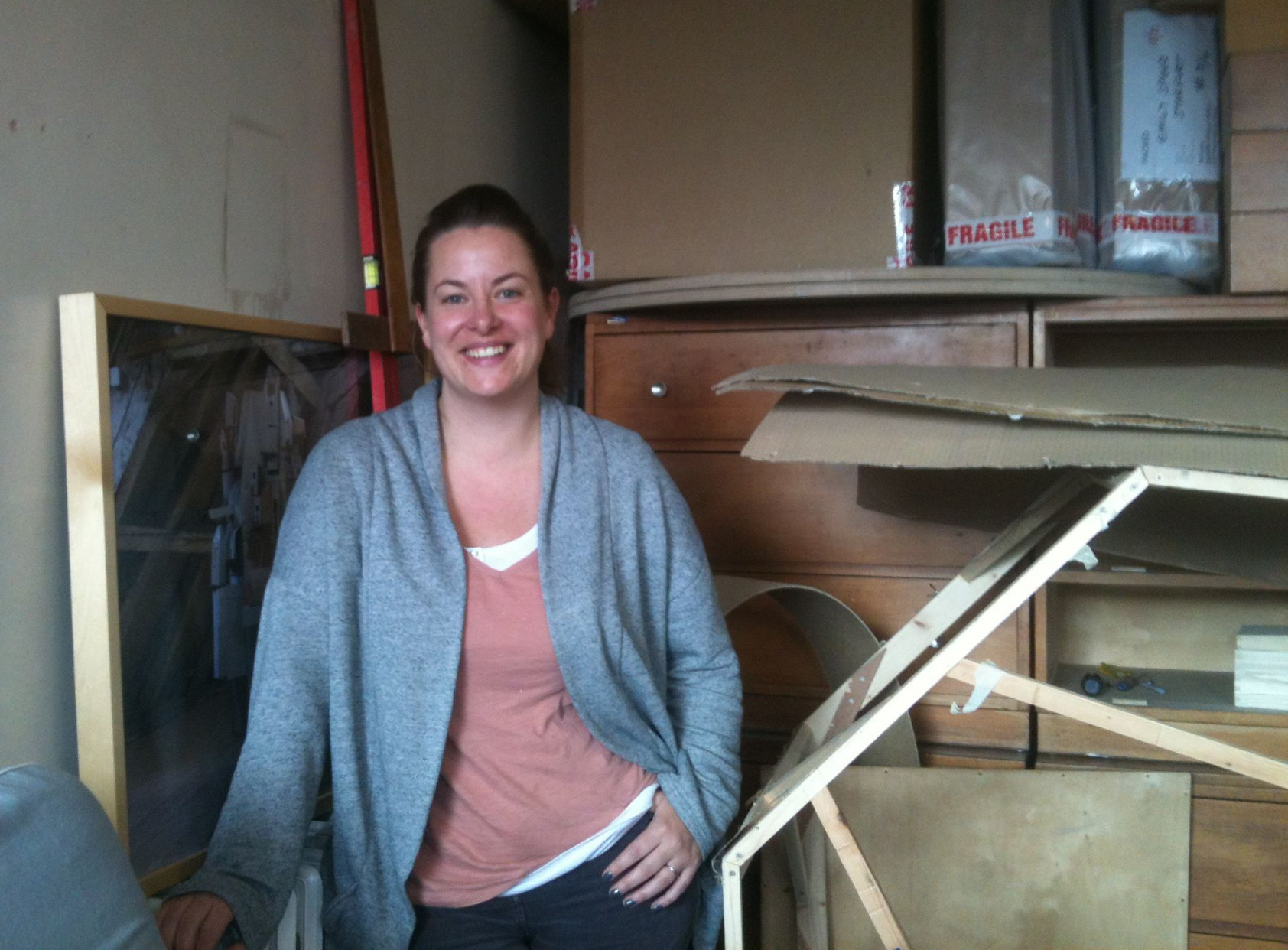 In the final instalment of Chris Sharratt's art-prize interviews he speaks to Emily Speed. She reflects upon the exciting developments that have occurred in her practice over the last few years, and the projects that have led to her nomination for the Northern Art Prize.

Walking through the streets of Linz, Austria, inside a sculpture made from recycled cardboard, was a life-changing experience for Emily Speed. “I’d wanted to actually wear some work for ages, but I didn’t have the confidence,” she says. “It was the first time I just did what I wanted – and it was great.”

The piece, Inhabitant, was part Dada-style costume, part DIY art project, part architectural model. With the artist’s bare feet poking out of the bottom, it resembled a kind of bizarre anthropomorphic form, a mythical cardboard city made almost human.

Created in 2009 during a residency at the Atelierhaus Salzamt (and recently bought by the City of Linz), nothing has been quite the same for Speed since Inhabitant. It’s a piece that represents a clear shift, a point from which her work has gathered greater momentum and traction. 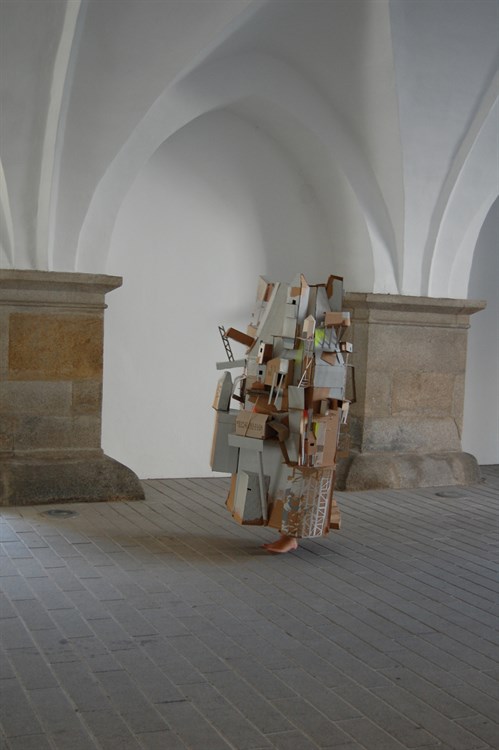 “Inhabitant was almost like sluice gates – it opened things up very simply,” she explains. “If the body is actually in the work then it’s a totally different kind of practice – that work led to every other work since.”

In 2010 Speed was nominated for the Liverpool Art Prize. The following year her solo exhibition at Yorkshire Sculpture Park (YSP) involved a series of ambitious works that traversed her interest in buildings, the body and where notions of shelter and clothing meet.

In Cabanon, she took a coracle topped with a cardboard hut out on the park’s lake; Mattdress & Drawers, a series of perplexingly curious photographs, saw her ‘wearing’ the left-behind furniture in a former halls of residence. The work showed a growing confidence and an increasingly brave, pioneering spirit. 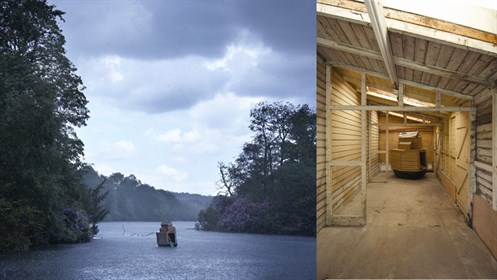 “In the last two years or so I’ve begun to figure some things out,” says Speed. “I mean there’s always anxiety, but I feel quite sure in what I’m doing.”

This year has seen site-specific commissions for Liverpool galleries The Bluecoat and Open Eye, and a one-off live piece, Human Castle, at the Edinburgh Art Festival, the latter being the first time she had worked with performers. Speed has also exhibited in Rome with Aeneas Wilder and Esther Stocker, and earlier this year created a second incarnation of Inhabitant in St Louis, USA. It has been a busy and exhausting time.

“I’m at a stage now when I have to stop and reflect a bit on a jam-packed couple of years,” she says. “I haven’t really had a chance to think about all the changes in my work.”

Even as she says this, it’s clear that time for reflection is likely to be thin on the ground for a while yet. There are new projects on the horizon, including a show with Hayley Newman at Castlefield Gallery, Manchester, and, most significantly, the 2013 Northern Art Prize, which she is shortlisted for. 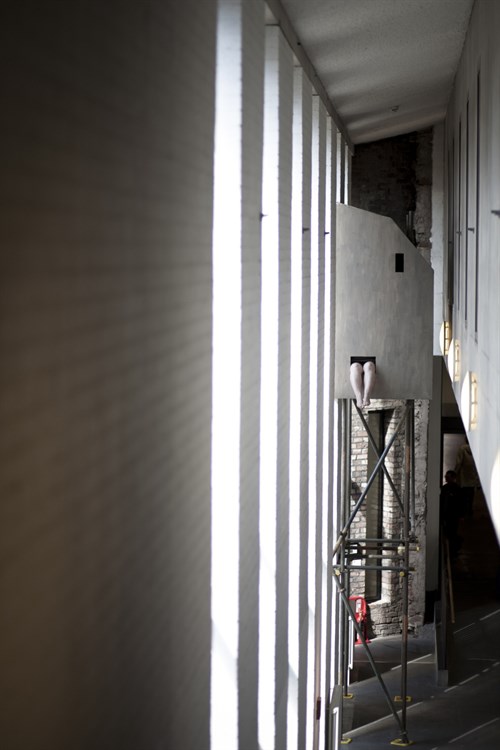 Speed was nominated for the award by Liverpool Biennial director Sally Tallant. She’s clearly delighted to be on a list alongside Margaret Harrison, Rosalind Nashashibi and Joanna Tatham & Tom O’Sullivan.

But there’s also sense of apprehension, nerves even. It is, after all, by far the highest profile thing she’s done since completing her MA at Wimbledon College of Art in 2006.

“It’s not an altogether pleasant experience being nominated for an art prize,” she says. “I think the pressure is in resisting the initial instinct that it [the art prize exhibition] has to be big and loud, because I don’t think that’s the case. But that’s what went through my mind with the first wave of panic when I’d just been shortlisted.”

Yet in the materials she uses – cardboard crops up most frequently – there is no suggestion of any real protection being afforded, of anything more than a kind of deluded idea of safety. With a huff and puff, you could blow these structures down. 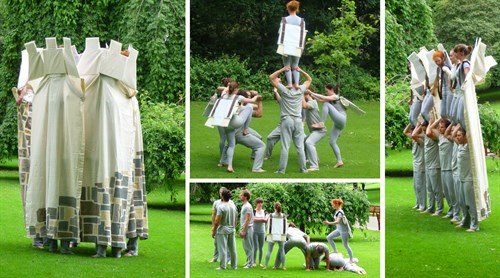 “Cardboard is a bit special for me – it’s not just that it’s free and you can find it anywhere, although that’s amazing,” says Speed. (IKEA, she explains, is one of the best sources: “You can stand around and help people unpack before they put it in the car, and keep the box really nice.”)

Speed talks about liking the traces of previous use that you get from secondhand cardboard, of the warmth and “a kind of humanity” that it imparts. While by no means the only material the artist uses, it is the one she’s most associated with. It also best embodies her generous, open approach, rooted in a strong sense of being part of, rather than apart from, society.

Work-wise, this has echoes of one of her favourite artists, Gordon Matta-Clark. But it is also, she acknowledges, connected to her own formative life experiences, in particular being brought up in a small north Cheshire village with community-minded parents – with the help of friends, they built the village hall. Speed’s grandad, an architect, got a Lottery grant to install the lighting.

“I guess those kind of things make you realise how much is possible if you involve a lot of people,” she says. “I got brought up being dragged on a litterpick every fortnight; as a teenager I was like, ‘I hate you Dad!’ But you know that it’s important, that you have to pull your weight.”

Speed left Cheshire in 1997 to go to Edinburgh, where she studied Drawing and Painting at Edinburgh College of Art. Periods in Italy, Japan and London followed, before moving to Liverpool in 2007. She’s now gone full circle, having recently set up home in the village she grew up in.

While that journey may suggest a kind of homecoming, bringing with it the reassurance of familiarity, the opposite is true in Speed’s approach to her work.

“I feel like I’m at a stage when things should be more difficult again. Human Castle was great because I was really uncomfortable, but in a good and exciting way, because you know that you’re pushing something.” She smiles: “I feel like I want more of that.”