Attractive and malleable: DIY art education in the UK 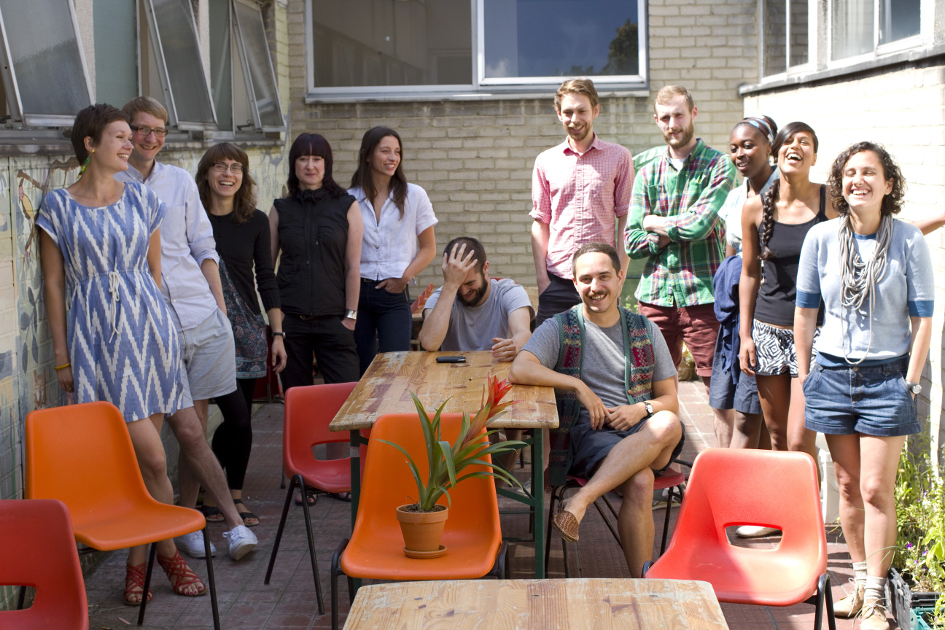 Do you really need to go to university to learn how to be an artist? Lawrence Bradby examines the idea of DIY art education in the UK

2006 was a significant year for DIY art education. There are two reasons for this. One is straightforward: in September the New Labour government brought in tuition fees for Higher Education. A degree became an expensive commodity and DIY alternatives seemed slightly more realistic.

The second reason floats in on the mysterious winds of curatorial fashion and owes much to Manifesta 6. This was planned to take the form of an experimental art school. Although it was cancelled, the aesthetic of DIY education had nevertheless acquired a fashionable allure for curators and galleries.

In the years since, the idea of DIY art education – artist-run or artist-led – has remained both attractive and malleable. This article looks at a few examples, addressing each one with the question: does the project help those involved to develop as artists?

JJ Charlesworth was one voice in the chorus of concern provoked by tuition fees. In the June 2008 issue of Art Monthly he argued that a combination of ‘bureaucratisation, managerialism and commercialisation of the last two decades’ had resulted in a situation where only about half of the fees paid by an art student went towards teaching with the rest going on ‘buildings, managers, research and admin’.

As an alternative Charlesworth proposed ‘a new wave of unaligned art schools, unaccredited, financially independent, yet with reputations built by the quality of their staff, rather than their balance sheet.’ He hoped such schools might secure ‘the independence and autonomy necessary to develop the culture we want as artists and educators’. It is noticeable that the ‘artists’ involved, those who will lead Charlesworth’s ‘new wave’, are the teaching staff not the students.

Around the same time a group of Foundation Year students in Salford were making their own assessment of British art education. Before filling in their UCAS forms they had taken the unusual step of asking other students about their experiences. 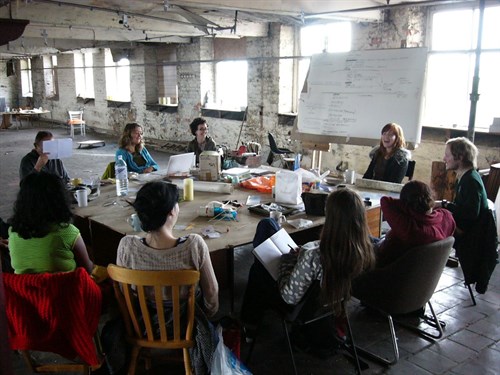 Meeting during the founding of Islington Mill Art Academy in 2007. Photograph by Maurice Carlin

In September 2008, Maurice Carlin, one of the students, wrote an open letter to Art Monthly in which he described how graduates several years out of art college had made it clear to him ‘that a whole other period of “education” was required to even begin to carve out something that resembled a career’. Rather than pay for an unsatisfactory degree, Carlin and some of his fellow students set about organising their own education, establishing a self-directed, self-organising enterprise which they called Islington Mill Art Academy.

The founders of Islington Mill Art Academy declared themselves artists from the very outset, and accepted that it would be an on-going process of self-education. Seven years on, despite being without BAs, they are nonetheless invited to show work with established institutions including Castlefield Gallery, Manchester. Co-founder Maurice Carlin says that: ‘Rather than a university where you buy into what you hope will be a particular experience, here you structure and co-author your experience, and you get to participate in what other Art Academy members are interested in, which might be quite different from your own interests.’

Another example of an artist-run art school is the School of the Damned in London. The website states that ‘although unaccredited, the school deems itself a Masters Degree in Art [and therefore] demands of itself a constant assessment of its proposed equivalence to established/accredited courses’. Students pay for their tuition with ‘three days of labour over the duration of the course to be exchanged for the Visiting Lecturers' time.’ Joseph Lewis, a current student, gives examples: ‘Labour can be as diverse as painting walls, proof-reading documents, designing websites, fabricating art works... The terms of labour are always arranged and agreed before the tutor attends.’ 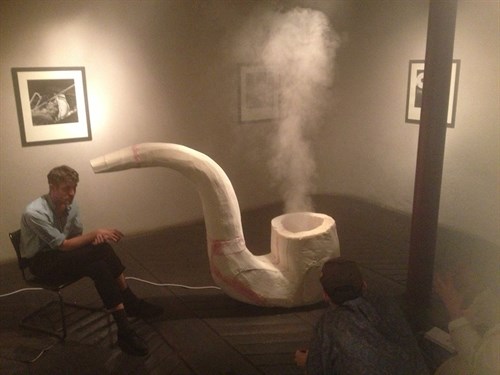 Student Liam Wright Higgins during a crit at School of the Damned, 2014. Photograph by Joseph Lewis

Both School of the Damned and Islington Mill Art Academy provide a closed setting for the rigorous examination of artists’ work, as well as ways to show work in public. Despite the contrasting rhythms of their work, both meet needs determined by the participants, and both support artists’ entry into the art world without imposing a long-lasting financial burden.

Some initiatives use education as a framing device, adding ‘artist-led’ as an adjective, while failing to give sufficient thought to who is raised up and who is excluded by this use of the term ‘artist’. Wide Open School at the Hayward Gallery was, in some senses, artist-led. But it was also driven by the need to fill an available slot in the gallery’s schedule. Other initiatives, like School of Global Art by artists’ collective Lucky PDF, are a vehicle for the artists’ own ideas and lack commitment to a shared journey of self-education.

The key question is not whether the initiative is artist-run but whether it is self-organised. Does it consider the pedagogical needs of all involved, or simply enforce the separation between those already welcomed into art institutions and those who are spectator-participants?

These are urgent issues for Open School East, a course that opened this year in East London. It positions a self-directed artist-run art school within a framework of institutional support. Twelve associate artists, most of them already art school graduates, have been selected and over one academic year they receive free tuition and workspaces. The website states that ‘while the first term introduces the associates to a broad range of approaches, positions and methodologies, the second and third terms are shaped by the associates’.

Open School East is a hybrid form where artists’ development is harnessed to a wider cultural exchange, aiming to facilitate ‘the sharing of knowledge and skills between artists, local residents, neighbourhood organisations and the broader public’. This allows the course to receive substantial public funding from the Barbican and Create London. Perhaps JJ Charlesworth’s proposed new wave of art schools could have drawn in public funding if it had been clear that they served a need within the surrounding community.

The need for credible and affordable art education is just as urgent today as it was in 2007. The mood, however, has changed... Fees are no longer a fundamental challenge inviting radical responses, they are the new routine. While inspirational examples like Islington Mill Art Academy persist, the idea of artists organising their own education is also used by art institutions as a convenient facade, a familiar format which claims to offer a new relationship between art, artist and audience, but in fact leaves things exactly as they are.

Contributed by Lawrence Bradby, May 2014

Axisweb at The Art Party Conference>

Our coverage of the engage conference 2013>

Extraordinary change: what kind of change do we want? Why thinking internationally and acting locally matters for artists and educators by Liz Ellis>

Alec Clegg and the case for arts education by Sheila McGregor>