Home Archive Clive A Brandon at the London Art Fair

Clive A Brandon at the London Art Fair 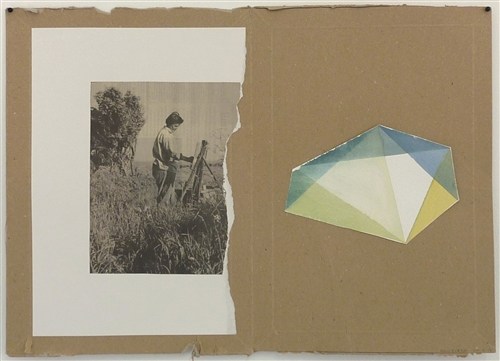 Elizabeth Cookson: You mention the influence of the artists Gordon Matta-Clark, Robert Smithson, Paul Nash and Kurt Schwitters: have they in some way framed what you do, and is there a dialogue going on between your drawings and their work?

Clive A Brandon: My work in the early 2000s was concerned with developing a way to combine painting, intervention and photography with Situationist and psycho-geographic walks. My aim was to make painting occupy and map space rather than represent it, and this was very much influenced by the ideas of Robert Smithson and Gordon Matta-Clark - for example, Smithson’s notion of ‘site’ and ‘non-site’ and Matta-Clarks’ ‘anarchitecture’ of broken, neglected, in-between spaces. I’ve always viewed Smithson and Matta-Clark as ‘landscape’ artists, and I’ve tried to continue experimenting with an expanded idea of what landscape painting can be, while also referring back to artists such as Paul Nash and Ben Nicholson.

Recently I’ve started to refer to artists directly in the pieces. I’ve definitely been trying to create a dialogue with these artists in my paintings and collages this year, almost as a kind of travelogue. While travelling in the past year, I have had what seemed like chance and coincidental encounters with other artists’ work. This began with going to the Schwitters show at Tate Britain the day before I left for Norway, to discovering Joan Eardley’s work in Aberdeen, and finding that William Gear from Fife connected with the CoBrA movement, and had visited Ricklundgården, the house where I stayed in Sweden. Also the location has had an effect on my work. Schwitters was also interesting for me, as he moved between abstract collage and realist paintings of landscape.

EC: In your artist statement you mention Robert Smithson’s idea of ‘ruins in reverse’ – what was Smithson referring to?

CAB: This idea is fed by seeing the relics of post-war utopian modernism via the entropic breakdown of post-modernism, and a sci-fi type notion of looking back at the future from the past. My experience of buildings and places which looked futuristic when built, but now seem to be ruins from a future society, enhances this feeling that we are looking at the ruins of our own future.

EC: What do you mean by ‘Utopian ideals of historical modernism’, and how does this relate to your work?

CAB: The notion of society linked very much to art and progressing towards a common goal has now been mostly discredited and deemed a failure, but to me, seems a very desirable direction for artists.

I suppose in my work there is a regret that art and, in a wider sense, politics are not visionary or forward-looking anymore, whereas it seems that it’s possible to have a nostalgia for a period when it felt like it did. The Modernism of the 1920s into the 1950s presented for the first time a truly democratic and all-encompassing vision of culture, politics and society. Art and sci-fi both posit and imagine alternatives to current ways of thinking and viewing the world, and these were both most closely linked, I feel, in the 1950s when a lot of new writing and thinking talked of progressing to a utopian future. 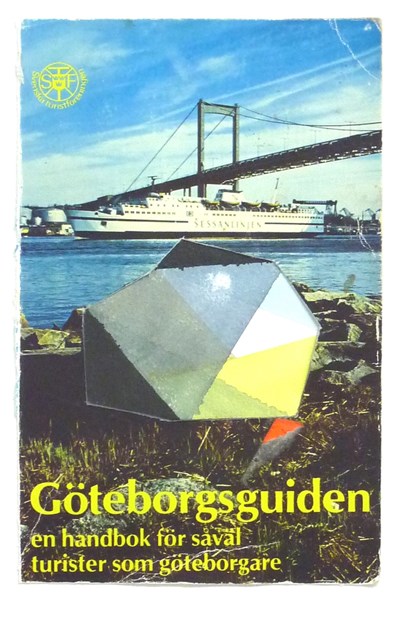 Clive A Brandon, Göteborgsguiden, 2013
Collage and watercolour on paper

EC: How does walking through cities and across landscapes impact on your practice?

CAB: Moving through and observing things at a different pace allows you to really absorb a place. My approach is very much influenced by the psycho-geographic mapping of the Situationists. For example, in my recent residency in Gothenburg, I made a deconstructed psycho-geographic guidebook. This has also been important when visiting residencies in more remote locations, and a kind of historical Victorian landscape water-colourist come explorer and hiker has emerged. The works have become like suites or expanded books that could function as guidebooks, like the Waymarkers in Norway.

EC: What is the significance of found photographs collaged within the drawings?

CAB: The found photographs act as triggers for work, such as the lino factory pictures from Newburgh, a photo of Joan Eardley painting outside, which I found in an art paper in my studio, or an old Goteborg tourist guide. I like to refer directly to the photos in the work, so this creates a very strong dialogue between the original image and my collaged additions, and the viewer is able to make links with the imagery while having questions posed about its new context.

EC: Is your use of materials such as masking tape part of a strategy to undermine perfection, to ruin…?

CAB: I like to show the underlying structures and processes of the work, referencing through materials the entropic breakdown of systems and structures, and I also like subtly to disrupt traditional methods and approaches while still respecting the history of them, for example, watercolour landscapes. I like using rough and ready materials such as masking tape and plasterboard and, during the residencies, cardboard, so the works have a feel of proposals or maquettes which are unfinished.

EC: You have undertaken many European residencies this year - have they shaped your thinking about future projects?

CAB: I’ve been exploring lots of different approaches through each residency, and it has given each phase of work a distinct feel, but there are themes emerging through all of them which I hope to work on resolving through the next year.

I’m really excited about making work at the moment and just enjoying the time on each residency. So far for 2014 I have residencies planned in Shetland and Iceland. I would really like to show the completed work from the series of residencies in one exhibition sometime in 2015. To be honest I haven’t planned much beyond the travelling this year, but hopefully my exposure at London Art Fair on the Axisweb stand will bring some opportunities!

Listen to our interview with George Charman>

Read our interview with Tom Hackney>