Home Archive Looking to remember: A literary exploration of...

Looking to remember: A literary exploration of the work of Sara Barker 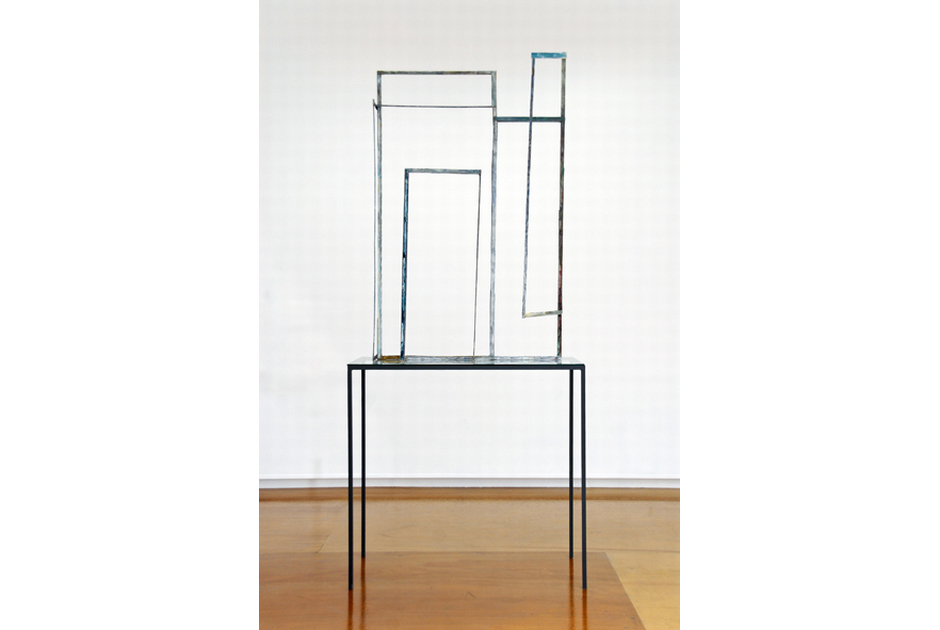 Following 2012's programme Developing critical writing on the contemporary visual arts, we commissioned three emerging writers to write a piece about an artist of their choice. We start with Ciara Healy who examines the work of Sara Barker in relation to Modernist literature.

Viewing the world from a wide-open window equips the artist with the raw materials for deep creative assimilation. Looking at the whirlwind of the outside from such a wide-angled vantage point allows the tumult of interior and exterior worlds to be experienced simultaneously.

For three female Modernist writers; Virginia Woolf, May Sarton and Doris Lessing, the act of writing presupposed such omniscience.

It was, among other things, a way of making sense out of, and gaining control over, internal and external chaos. These writers are the catalytic agents for Sara Barker’s fragile sculptural constructions because they all share, to some extent, the belief that a breakdown is also a breakthrough. It can lead an individual or society to a higher sense of understanding, releasing the spirit from material confinement.

The tools Barker chooses to work with make such a notion visible. Painterly brush marks of oil, acrylic, gouache and watercolour are applied to bolts, metal filler and slivers of aluminium or copper. There is an inherent frailty in the way these materials are precariously assembled. Pushed to the point of breakdown, they are, at times, literally ‘cracking up’.

'Woman at Window' (2012) is a particularly good example of this. Shown at Stuart Shave Modern Art in late June 2012, it is made of multiple, insecurely connected window and door-like constructions supported only by one slim aluminium rectangle resting squarely on the gallery floor.

According to Barker this rectangle resembles a figure, more specifically a female figure found inCaspar David Friedrich’s painting 'Woman at a Window' (1822). Coated in a patchwork of St. Ives blues, aqua greys and sun-bleached stone rose pinks, the confluence of vertical metal fragments illustrate the kind of division of self we develop when we encounter the full force of beauty, love or pain on our own.

In her essay Evening over Sussex (1942), Woolf describes such a solitary experience as a wasted chance: “There is always some sediment of irritation when the moment is as beautiful as it is now...one is overcome by beauty extravagantly greater than one could expect…[it is] spread at one’s right hand, at one’s left; at one’s back too; escaping all the time; one could only offer a thimble to a torrent.”

In order to cope with the evanescent she concludes it is “best to sit and soak; to be passive; because nature has given you six little pocket knives with which to cut up the body of a whale”.

Woolf’s six knives are the metaphorical equivalent to Lessing’s notebooks in her communist, feminist, Sufist, historical text The Golden Notebook (1962) and to Sarton’s assertion in her text Mrs. Stevens Hears the Mermaids Singing (1933), that Love opens “the doors into everything, including and perhaps most of all, the doors into one's own secret, and often terrible and frightening, real self.”

This real self, described by Sufists as the ‘Perfection of the Absolute’ comes from the very ancient mystical need to transcend individuality and experience existence within one dynamic whole; that of a global consciousness. Lessing wrote extensively about these ideas because they strove for something unknown, affecting and unconscious.

Barker has continued this discussion today and is among an increasing number of emerging artists who incorporate Eastern perspectives into their practice. Perhaps this is because of the tacit but growing awareness that Western, post-industrial social structures are not going to end well. 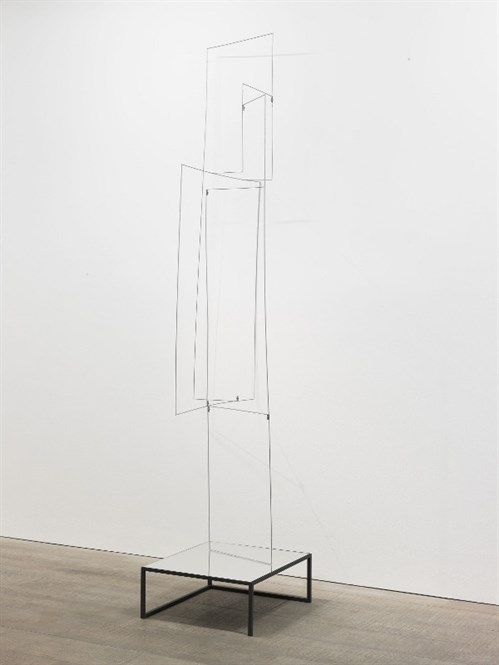 But the pendulum swing from rationalistic to romantic viewpoints and back is also an inevitable consequence of the dialectic movement of Western history. 'Nature-builder' (2012), which refers to the rational need to control, order and inhabit space, is a construction of delicately slender metal rods bolted together into pragmatic Meccano like sections.

Unlike the romantic 'Woman at Window' these metal rods are unpainted and are assembled at right angles in order to represent the functionality and rigidity of architecture. But they fail in their attempts to do so because the slenderness of the materials cannot sustain the unyielding shapes they are designed to hold.

As they droop and sag almost animatedly they begin to look like a three-dimensional drawing that trembles on the precipice of collapse. Their futile aspiration to be fixed alludes to the consequences of living an excessively material life when resources are ultimately finite.

Many Modernist thinkers such as E.M. Forster and Margaret Schlegel were wary of the sentiment that gathered around belongings, believing that material possessions were a false form of allegiance.. But possessions are a symptom not a cause, a symptom of having no fuller sense of belonging.

Woolf’s Victorian houses were packed with strange items inducing claustrophobia and demanding that the sentimental ties they represented be honoured. She, like Lessing and Sarton recognised that the present is always answerable to the past.

The room and its contents therefore, have implicit cultural boundaries as well as social histories and pressures to conform. Barker’s literary and philosophical research into Sufism attempts to transcend these internal and external restrictions. She, like Lessing, Sarton and Woolf acknowledge the porous possibilities of architectural spaces where an absence can also become an expression of presence.

This is most apparent in 'La Leçon du Piano', (2010) a title taken from Matisse’s oil painting by the same name in 1916. Inspired by his use of colour, optical flatness and interior patterns, Barker’s vertical composition is reflected beneath a glass table top opening up the possibility that only a fragment of the whole artwork is visible, a kind of liminal space can be glimpsed in the shadows.

Like the Sufi contention that we are all made of transient influences, Barker imagines the room as an ethereal alternative for many possible simultaneous realities.

Woolf, Sarton and Lessing collectively meditated on the flux of time as a process of corrosion and rejuvenation in order to go beyond certain understandings of consciousness. Barker’s wide-open windows not only reference and draw inspiration from their philosophies; they also recognise that our power over reality is partial. Her quiet aesthetic accepts the poetry of uncertainty in a manner that is as succinct as verse, as sublime as a prayer of becoming.

Ciara is a book artist, writer and Head of Critical and Contextual Studies at The School of Creative Arts, Carmarthen. She was part of our programme: Developing critical writing on the contemporary visual arts in 2012, supported by the Arts Council of Wales.