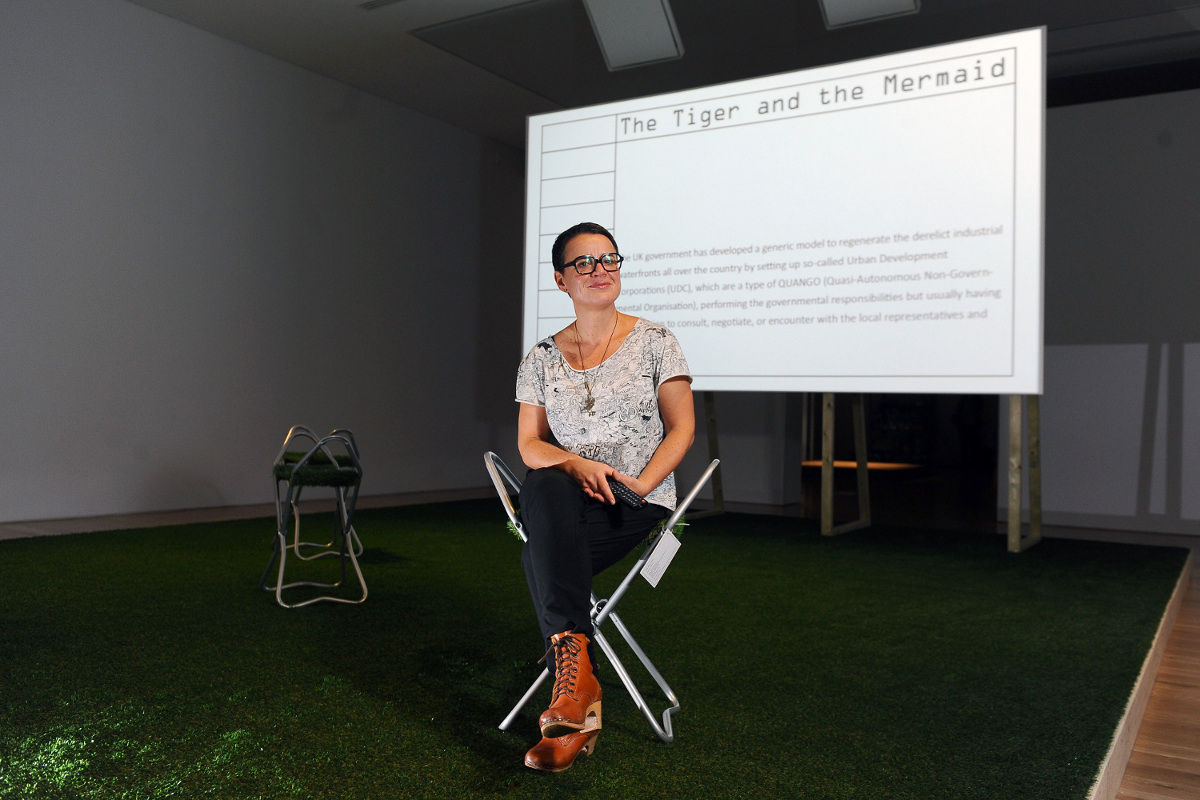 For our third Art Prize special, Chris Sharratt met Artes Mundi Prize nominee Apolonija Šušteršic. In this interview she shares her thoughts on success, nationality and her public art practice.

“Sometimes,” says Apolonija Šušteršic, “I come to a city and I think, ‘Oh God, it’s so horrible here’. But the more I see the place and get to meet and know interesting people, then I think, ‘I’m at home’.”

Born 1965 in Ljubljana, the capital of what is now the Republic of Slovenia and was then part of the Socialist Federal Republic of Yugoslavia, Šušteršic describes herself as “a nomad”. It’s a description that reflects not just her globe-roaming lifestyle, but also the way her work is rooted in, and shaped by, its context.

“I’ve never been a traditional studio artist producing work,” she says. “I’ve always insisted on production in relation to a specific context, and produced it within that context as well. I’ve never actually sent in a proposal to anyone.”

Šušteršic’s practice explores how people and communities relate to public spaces, and the negotiations – democratic or otherwise – that are required to navigate this relationship. Her research-heavy work has often involved creating environments or architectural structures.

Along with six other international artists, Šušteršic is nominated for the 2012 Artes Mundi prize. The biennial award recognizes artists whose work relates to people’s lived experience and the wider society – a prize of £40,000 is awarded to the winning artist.

“Of course you’re happy about it, to have the recognition for what you do,” smiles Šušteršic when asked “the award question”, as she puts it. “But it’s more than that – it’s also a kind of recognition for artists who have a similar approach. Artists dealing with socially engaged work, whose practices are not embedded within the art market but are trying to survive in another way.”

For the Artes Mundi exhibition, Šušteršic has made a film about the divisive and controversial Cardiff Bay development and in particular the barrage, which was completed in 1999. After an initial visit in May, she spent the whole of August in the Welsh capital, interviewing those involved in, and opposed to, the scheme.

“I’m clearly taking sides [in the film],” she says. “But the problem is not as black and white as that. The question of the development and the democratic discussion around it is a complex one that has a more complicated answer.

My question is, why do we always have to measure things through the economic parameters – can we set up other values?” Šušteršic concedes that many will see such a notion as hopelessly utopian.

But to some extent, she says, the role of the artist is to be exactly that: “I would defend the art context as the only place where you can suggest the unsuggestable,” she says. “Where you can perhaps ask questions that are somehow in the subconscious, or questions that society wouldn’t normally want to ask or to hear.”

Šušteršic trained as an architect in her home city, beginning her studies in the late 1980s as the Federal Republic began to teeter. By the time she graduated in 1992, Yugoslavia had splintered and collapsed.

When General Tito – the father of what Šušteršic characterizes as “hedonistic” Yugoslavian Communism – died in 1980, she was a teenager.

Growing up in this atmosphere of change, and the possibilities it offered, clearly had a profound effect on her. “It does make you think that you can change things and that things can be different – that you are allowed to question the way things are,” she says. “Particularly when I went to school, which was a time when there was a possibility for questioning and you weren’t immediately imprisoned.”

One of the things Šušteršic questioned after graduating was the field of architecture itself. Instead of pursuing a conventional career as an architect, she left Ljubljana and headed to Amsterdam, where she studied at the State Academy of Fine Arts.

“I am still very fond of architecture as a profession, but I find it quite rigid, quite stiff in terms of thinking of other possibilities or impossibilities,” she says. “I am trying to perform a very different practice, and working in an art context is very important to me.”

Although now based in the Netherlands (“I pay taxes in Amsterdam,” she smiles), her nomadic life and, more importantly, her background growing up in a country that no longer exists, means she dislikes being defined by nationality.

“I’m not very happy when people describe me as Slovenian or Dutch or whatever,” she says. “I can find a home where ever I am and I can adapt to the situation quite easily.”

Šušteršic’s ability to adapt was tested to its limits during The Hustadt Project, her biggest undertaking to date. Built in the late 1960s on the outskirts of Bochum, a city in the Ruhr area of Germany, Hustadt was planned for a population of 6,000, consisting at the time of academics from the vast Ruhr University and employees of the local Opel car plant.

Today, its social mix is very different and more transient, made up of many nationalities, young families and students.

In 2008 Šušteršic was commissioned to produce a public art work in the centre of the estate. She moved to Hustadt in 2009 and lived there for nearly three years. One of the first things she had to do on arriving was learn to speak German.

The physical legacy of her time there is a community pavilion designed in collaboration with residents. But, says Šušteršic, the project was much more about the process than the finished building.

“The result of the three years isn’t the pavilion, it’s some kind of network of people that starts to communicate with each other, that starts to get to know each other, to realise that maybe, perhaps, they can’t work together – but they had to go through the process of getting there. There were lots of ups and downs – it wasn’t all super brilliant!”

Although no longer living in Hustadt, it remains very much part of her life, and is the subject of her PhD research at Malmö Art Academy, Sweden. “I was on purpose deeply involved in
Hustadt to test the limits of my own role,” she says. “But I loved it, it was just a super, super nice place to be.”

But would she put herself through something like Hustadt again? She pauses and laughs: “Yeah, sure… But not right away. It has also been super heavy – I think I need a break!”

The winner of the Artes Mundi prize will be announced on 29 November 2012.

The Artes Mundi 5 exhibition runs until 13 January 2013 at the National Museum of Art, Cardiff.