Home Archive Art. What's the Use

A programme about artists working outside of the gallery system

Art. What's the Use 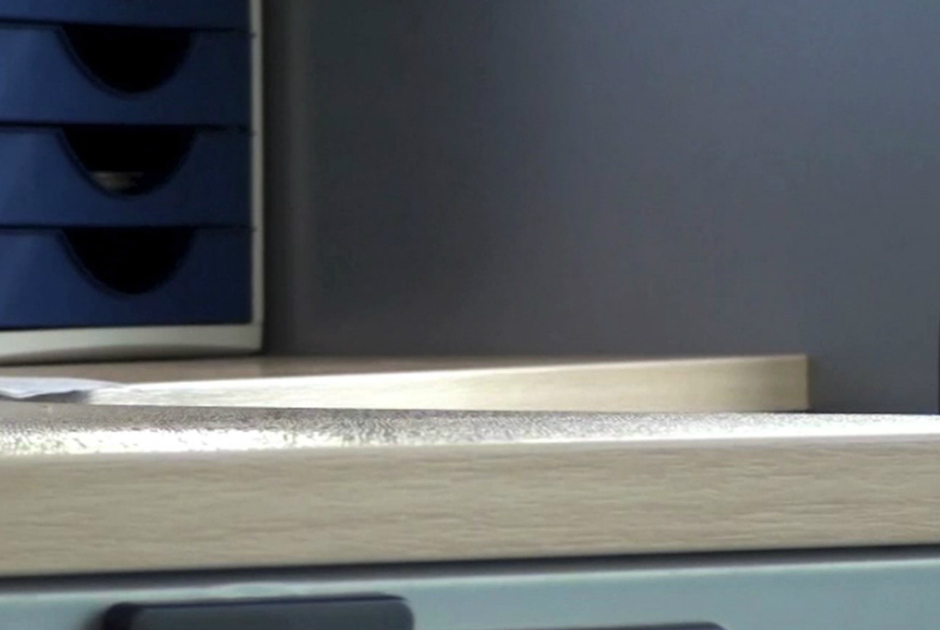 Lara Eggleton's latest post on her blog Folly Matters wonders whether demanding usefulness from art itself can miss its value.

There has been much clamour of late about the usefulness of art. An art advocate might say that expression – whether commemorative, symbolic, expressionist, conceptual or formal – is valuable or ‘useful’ in its own right. A sceptic, on the other hand, would argue that the large majority of contemporary art is elitist, materialistic and insular. From either standpoint, I remain convinced that art has the potential to challenge definitions of use value, and thereby to change opinion or shift perspectives. Why else does art continue to thrive even without obvious practical or functional applications, even (or especially) in times of austerity? I have been following this question of usefulness for some time: through the pondering the inferior position of ornamental traditions within Western Art History (and the forced divisions between the fine and decorative arts), and through the folly as a construction that serves no other purpose than to compliment a landscape or symbolise the passage of time.

I’ve been reading up on Grizedale Arts, an arts organisation and curatorial project based at Lawson Park farm, above the Coniston valley in the Lake District. Grizedale’s main agenda, at least under directors Alistair Hudson and Adam Sutherland, has been to explore the use value of art – with ‘resident artists, architects, designers, crafts people and critics often working directly with the location and its inhabitants – holding events and activities that engender a collision between arts, community, political and economic thinking and practice’. This focus was developed into a manifesto for the Office of the Useful Art Association, a collaboration initiated by Grizedale and Cuban artist Tania Bruguera, and an integral part of Grizedale’s 5-year touring project: Uses of Art: The Legacy of 1848 and 1989. The project has been hosted by venues across Europe, including Tate Liverpool and Ikon Gallery in the UK, and has just come to rest at MIMA under the new directorship of Hudson. In each manifestation the Office is a space that requires activation, and is wholly dependent on external collaboration. Visitors are invited to add to the archive of useful art, or, ‘participate in this working space, with opportunities to make, create and share your ideas of what useful art means to you’. 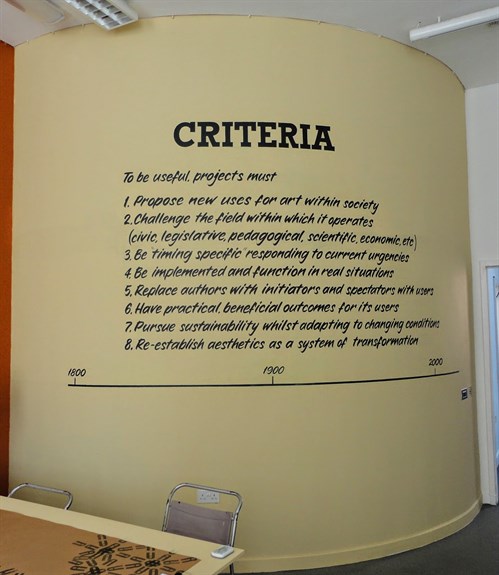 Since 2012 Bruguera has been testing the boundaries of socially effective or useful art, beyond the politics of representation and symbolism that normally serve as its markers. She is asking for a reconsideration of the quality of exchange between art and its audience, with visitors invited to join the Asociación de Arte Útil (Useful Art Association), a membership organisation that underpins Arte Útil or Useful Art. Bruguera explains:

…the utilitarian component I’m looking for does not aim to make something that is already useful more beautiful, but on the contrary aims to focus on the beauty of being useful. It looks at the research of the concept and potential of usefulness itself as an aesthetic category.

More instructionally, the useful art movement asks ‘what can artists do for society, and what do they want to do it for, what can society expect from artists, and what does it want them to do, where should artists open up towards social concerns and where do they need to defend themselves so as not to be appropriated by various groups and their interests?’ (rather long-winded, but at least covers all the basis of intention, production and reception). Despite the good intentions of such a project (in line with Hudson’s aim of rescuing art from the dual threat of its own autonomy and consumer capitalism), I can’t help but feel there’s something missing here. Doubtless, there are many socially affective artists and collectives out there – most topically, the Turner Prize nominated Assemble – who are working with communities to develop (regenerate?) the areas which they inhabit. But, without the direction or influence of artists or curators (read: authorship), how can we call it art? Is it possible to feel collective ownership over something that was a priori conceived and framed within the language of art theory and political philosophy?

When students ask me the inevitable question that hangs over relational aesthetics: ‘But is it art?’, I am often surprised to find myself coming to the aid of socially engaged practice. I point out the range and diversity of such work since the 90s, from Santiago Sierra’s ‘160cm Line Tattooed on 4 People’(where drug-addicted prostitutes were paid the price of a shot of heroin for having a line tattooed across their backs in a gallery space), to the utilitarian work of Superflex that creates democratic production conditions and encourages self-organisation. More recently, Tino Sehgal has taken the art world by storm (and the participant hostage) with his aggressively interactive workshops in which the line between actors and participants is unnervingly blurred. 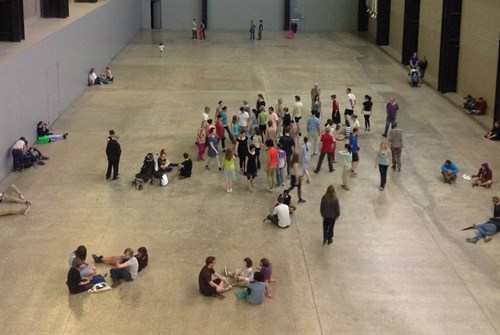 Thomas Hirschhorn’s interactive monument-installations dedicated to philosophers such as Spinoza, Deleuze, Bataille and Gramsci have done much to shake up the class and economic hierarchies endemic to the art world under neoliberalism. Similarly, Carey Young’s ‘Conflict Management’ installations offer visitors free counselling services in the street, within clear view of multinational corporation buildings and signage. With relational practice now a well-established tradition, why does it continue to raise the hackles of art goers and laypersons alike? I find myself dangerously close to empathising with Jonathan Jones in his scathing (what else) review of Jon Fawcett’s interactive work at the Tate in 2012, when he moans, ‘Can I go and see the abstract paintings now, please sir? I’ve done my interactions’.

‘Social interaction’ can mean a number of different things, and it is not my intention to paint all relational works with the same brush or belabour already much belaboured points about the condescension and exploitation that continue to haunt relational practice. However, the more I hear about the need for artists to make themselves useful to society by way of initiating social interaction, the more I think we’re sending them down a misguided and already well-trodden path. Human cooperation is a behaviour learned very early on in life (as Richard Sennet argues in his book Together: The Rituals, Pleasures and Politics of Cooperation), following the realisation that we can only fulfil our basic needs with the help of others. From this perspective, breastfeeding and house building are cooperative tasks through which we learn to work with others out of shared necessity. Cooperation can be difficult, requiring us to overcome our discomfort and fear of difference. We learn to do it because it makes our lives easier, and satisfies a basic need for social contact.

Contemporary art projects which adopt the cooperative model – communal meals, regular meetings, membership schemes, skillshares – are picking up on this built-in aspect of human behaviour and reminding us of its social and political importance. Contradictorily, many of these interactive projects prove awkward in their staged ‘relationalism’, recalling social experiment tactics or loosely scripted performances. Cooperation is unnaturally provoked, with participants forced into conversations or interactions with complete strangers, the ‘results’ documented by artists and institutions for proof of their success (impact?) and for posterity. I can’t help but think that with all the effort of such performances: why not just start an actual coop, or organise a real political action? Having been a member of a particularly well-functioning cohousing community for nearly a year, I can say that living and working with others is a truly rich and empowering experience – but I wouldn’t call it art.

Can social relations be called art? It’s a tough question. Like art, human relations are complex, they require work and skill, and some people are naturally better at it than others. I’ve always had a problem with Nicolas Bourriaud’s assertion that social relations can take the place of or become the artwork, for, as many others have pointed out, it is still the artist(s) or curator(s) that ultimately have authorship over those relations. Or, put another way, they wouldn’t have happened if that artist or curator hadn’t instigated them (nor would they take place in a gallery setting if the institution hadn’t offered a platform). To state the obvious, social relations happen all the time, as well as cooperative initiatives, and they don’t require artists or a bespoke venue.

Hudson and others see the potential for art to be rescued through this avenue of social relevance, or usefulness, but I worry that they’re throwing the baby out with the bathwater. A necessary counter-question is how is art already useful, how does it already affect social change? And not just socially engaged art: all the other traditional (read: non-relational) forms of art production. What about all the ways in which art can open up spaces to think differently about our world, or show us things that we wouldn’t have noticed or thought about otherwise. The ways it teaches us that we can be different, better (more cooperative, even), not as part of an artwork, but in our everyday lives?

I’m grappling here with a paradox that I think lies at the heart of this ‘useful art’ debate, which is that contemporary practice is inextricably tied to authorship and therefore can never be fully in the service of society. Take Grizedale’s Mechanics Institute. In attempting to transplant a Victorian philanthropic initiative (intended to foster artistic skills amongst working class people) into a very different social-economic context (Coniston is home primarily to wealthy retirees and a steady stream of tourists), it glosses over the complexities of what it means to be ’empowered’ as a participant. This is further complicated by Liam Gillick’s commission for the Institute’s library, which amounts to its interior decoration; some sculptural-looking readings desks, a warm colour scheme and framed print. Otherwise, the room functions as any other village public library, ordering and lending books to local residents. I can’t help but feel that this is an abuse of the name of an internationally recognised artist, whose intervention means little or nothing to the users for whom and with the Institute was revived and renovated. Why involve Gillick if not to pander to an art world that deals in names and reputations, and the financial success that goes with them?

At the same time, such contradictions and shortcomings throw into question the usefulness of art at a time of austerity and great political change. Unlike revolutions of the past, art no longer plays a leading role (think Jacques-Louis David’s Death of Marat of 1793), but a more responsive, critical one. Relational practice has grown out of a basic human need for interaction and cooperation, things that are ever more endangered in post-capitalist, individualistic societies. It points to something that is missing – which is in itself a useful gesture – even when it fails to fulfil a remit of social solidarity and action. In their failure to assimilate or recreate these practices, relational projects act as a mirror or symbol of the frustrating, disjointed experience of citizens of first-world, democratic societies who have been taught to put the needs of the individual first. Cooperation is a skill many of us have lost, along with other practical skills for sustainable living. Their disfunction shows us that we should be relearning and implementing such skills in our day-to-day lives (and many are), not acting them out as art.

Lara Eggleton is an art writer and historian based in Leeds

What is art for? Part one

Validation beyond the gallery